Douglass Board Accomplishes Much at Meeting

The Douglass Alumni Association Board of Directors took several steps to return its operations to normal at its meeting on Saturday, August 22nd.

After a contentious meeting on August 1st that left the Board's existence in doubt, directors met Saturday and passed the following actions: 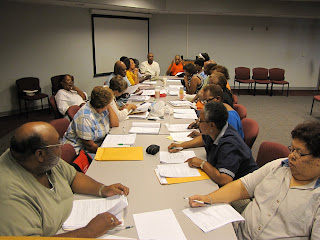 2. Validated the election of Executive Officers held on June 27th. Those officers, including 2 permanent officers immediately took office on that date.

3. Allowed Doug Releford to rescind his resignation as Executive Board President. As elected, Doug is President of the Douglass Alumni Association for the next two-year term.

All challenges to the election were dropped. 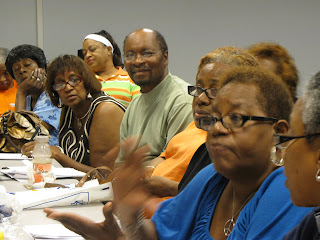 And then, there was the Herculian task of updating the Association's By-Laws, rules that have governed the organization since the 1970's. 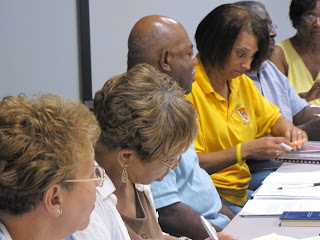 Updates were applied to the by-laws that govern the dues paid by Douglass Alumni; the committee that plans the Douglass Reunion banquet was renamed the Event-Planning Committee, and more responsibility was given to alumni living out-of-town.

Also eliminated, were two separate by-laws, that had conflicting dates on when the election of Executive Board Officers are to be conducted. Recommendations from Roberts Rules of Order, allowed the officers elected on June 27th to be validated.

One of the most important decisions made, is the establishment of what amounts to a 3-tiered structure of the Alumni Association. The First Tier is the Douglass Alumni Executive Board of Officers, which are all elected positions. The Second Tier is the Working Board of Directors, which consists of members who meet to attend to the month-to-month, sometimes day-to-day operations and administration of the Alumni Association's business. The Third Tier consists of all Douglass Alumni members in good financial standing (paid their dues).

Although the motions updating the by-laws listed in the minutes of the Saturday meeting below might seem confusing right now, they won't soon. In the coming weeks, NEW by-laws designed to hold the Executive Board and the Working Board accountable, both financially and morally, will be reviewed and considered. Right now, they are being scrutinized by a parliamentarian.

After that, a complete version of the Douglass Alumni Association By-Laws, both updated and any new additions, will be available on your Douglass Website.
Posted by douglassriverview at 12:10 AM