THIS STORY CONCERNING OUR PHYLLIS (YOUNG) NICHOLS IS COURTESY THE KNOXVILLE NEWS-SENTINEL, AND IS GENERATING A LOT OF COMMENTS---SEE ALL OF THEM IN THE OP ED-LETTERS TO THE EDITOR SECTION

By Lola Alapo
Posted August 28, 2009 at 4:08 p.m.
KNOXVILLE - The president of the Knoxville Area Urban League has resigned from the Rotary Club of Knoxville after hearing what she perceived as a racist joke during a luncheon Tuesday. 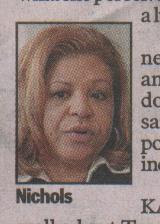 Phyllis Y. Nichols walked out after speaker and businessman Joe Johnson made a reference to fighter Mike Tyson and used what she thought was a stereotypical mockery of the black dialect.

She later e-mailed her resignation to club president Sam Albritton.

Nichols was one of three black members of the club of about 200. She also was the only black female, she said.

"What I'm trying not to do is indict Rotary," Nichols said. "Rotary International is a terrific organization and I believe in it. I just choose not to be part of that particular club."

Johnson, founder of A&W Office Supply in Knoxville and also a member of the downtown club, said he meant no offense.

"I've apologized to Phyllis," he said. "There was never any intention to do anything insensitive to her or anyone else."

The local Urban League promotes diversity and economic and social equality for all residents, according to its Web site.

More details as they develop online and in Saturday's News Sentinel.
Posted by douglassriverview at 8:44 PM