THIS STORY COURTESY THE KINGSPORT TIMES-NEWS FOR BLACK HISTORY MONTH


Geraldine Swagerty carries on the legacy of her grandmother.  A nanny, nurse, preacher and teacher, ‘Vannie’ Van Buren Elizabeth Williams Crum is pictured in the second picture below holding the great-great-granddaughter of President Andrew Johnson. 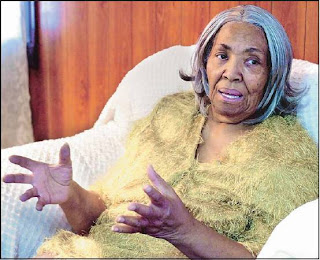 KINGSPORT — When Geraldine Swagerty was growing up in Greeneville, there were two water fountains downtown. She was not allowed to drink out of one of them and that made her so mad she once spit in the one marked “Whites Onl y. ”

That earned her a reprimand from her grandmother, a woman who withstood the blind racism that spread through the South, teaching her granddaughter to care and comfort instead of spewing hate.

“I was young back then, and you know how it is when you are a kid, it doesn’t take much to make you mad. But I saw my grandmother be firm but calm about the things that were being done and said. She told me the Bible told us to love one another no matter the color,” said Swagerty.

Swagerty speaks with reverence about “Vannie” Van Buren Elizabeth Williams Crum — the grandmother who would preach and teach lessons to Geraldine that she would carry on into helping those hungry for their next meal and for the word. Nanny, Nurse, Preacher, 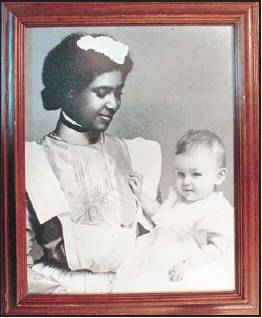 Crum went to work in Greene County at the age of 15 for the Martha Patterson family, descendants of President Andrew Johnson.

By the age of 17, Patterson would have a child, Margaret Patterson Bartlett, Johnson’s greatgreat-granddaughter, and Crum had such skills in nursing and a loving care with the child, according to Swagerty, the family would have her travel with them and stay at their home.

Crum would continue to work in the Greeneville community, doing housecleaning and other duties while going to the city jail and doing Bible studies with inmates.

“She told them, ‘You all need to hear something good.’ She thought they needed to hear the word just like any free man could on a Sunday,” said Swagerty.

Crum also earned the respect of people in Greeneville for her skill in helping sick people.

“They would fetch her, even the midwives who were ready to deliver and they got in a bad way,” Swagerty said.

“I saw her several times make what some people called a soup that would bring people back to life. I mean, these people that would be so sick they would be bedridden, but she would open their mouths, put in the soup, and then she would get on her knees and pray.

“One boy, I recall, had already turned blue. She got the soup, prayed, put some oil on him, and the next thing I knew this child was sitting up in the bed asking my grandmother for some cornbread.”

Swagerty admits she was troubled by her grandmother’s actions because some of the people who would come and beg her to help their children were the same people who had uttered racial slurs at them just days before.

“She taught me so much through her love. To be able to help someone sick who had said something bad about them, that is the work of a true humanitarian. She always told us not to look at the color of someone’s skin. If someone needs help, you help them. That is what we are taught to do,” said Swagerty.

She also remembered another room that had to be built onto her grandmother’s house because of the number of people she took in off the street or those who were hungry.

“She let them stay in her house no matter what,” Swagerty says. “She had such a caring soul for people — young, old, sick, poor. She wanted us to remember that when she would feed those people or give them a cot to sleep in on a cold night.”

Swagerty has continued her grandmother’s vision by taking to the pulpit on Sundays and by opening up the basement of her Full Gospel Mission Church in downtown Kingsport with a soup kitchen that has been feeding the hungry for 12 years.

The process of caring for needy residents has not been easy. With more and more people asking for help and limited resources, Swagerty has dealt with the problems with a simple philosophy — He Provides.

“The Lord has given me everything I have needed in this life and at the kitchen,” she said.

“We’ve had people steal the salt shakers, the toilet paper, heck, they even stole the toilet seat one time. I’ve had people come in for a meal and I have found them asleep upstairs in the church. How can you refuse to help a person like that? You don’t turn anybody away.”

The lessons that Crum taught her granddaughter weren’t always easy but they were ones that over time have become the path to a lifetime of service.

“We can go through life being mad at one another, but I’ll tell you, I’ve got better things to think about and a better life to live than one filled with hate toward someone else. And if I can turn someone toward helping another, then I have done what my grandmother taught me,” Swagerty said.
Posted by douglassriverview at 7:41 PM