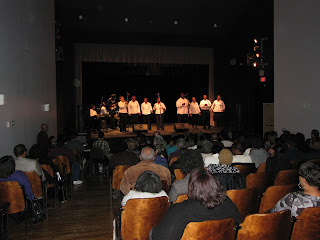 Many Riverview and Kingsport residents returned to their spiritual roots the night of Saturday, January 28,2011.

Gospel Fest brought together many area gospel music singers and groups, whose voices lifted to the heavens.

They took most of the audience right along with them.

Click here to see a picture slideshow of Gospel Fest 2011 at the Kingsport Renaissance Center. 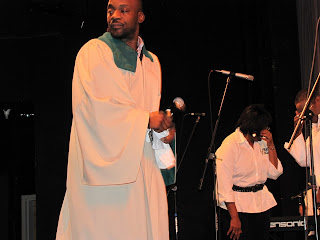 Emcee for this year's event was Riverview's own Xavier "Tim" Hall, who absolutely kept the audience in stitches between each performance.  Tim, who was raised in the church, did not hesitate to remember the little things in church everyone has taken for granted for many years.  At one point, he came out in a choir robe, to teach the singers how to represent in a black church.  The laughter grew louder, as his remembrances hit closer to home.

The event serves as the official beginning to Black History Month in February.
Posted by douglassriverview at 1:58 AM