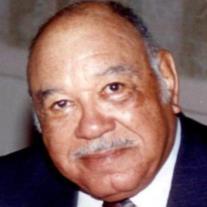 
To Mrs. Deering and the Family of Coach Deering:


I remember Coach Deering as a teacher and echo the wonderful words that have described Coach Deering on the Douglass web site. What I want to say is what he represented to the Black male population: a Black man who stood for something-what he believed and knew to be true about what he was teaching, how he was teaching it, and what he knew you needed to know before you completed his class. Coach Deering cared about his students. I do not ever remember receiving above a “C” in Coach Deering’s class. However, to be clear, I was glad to get it! He was tough in class. You did not talk but you did listen, and he made sure that you knew he was not going to begin until you did. Coach Deering was very much like all of the Douglass teachers during the sixties: our teachers were smart, intelligent, brilliant! They taught us to not wait on the present and to fear no past or future. They made sure that we kept our eyes on the prize. Coach Deering was not only a coach of athletics but also a persistent coach in the classroom. We will never forget Coach Deering.

Mr. Deering helped prepare his students for success with his "no-nonsense" style - He simply DID NOT tolerate a lackadaisical attitude toward turning in assignments! - as much as anything he taught from the book. He really challenged us to do/be "MORE".

FROM SHIRLEY AND WALLACE POWERS:


We want to express our deepest sympathy, God's blessing and love to the family,in the loss of Coach Bob Deering.  We are remembering him in a special way,especially for his time spent in the classroom and on the football field.
Respectfully,
Wallace & Shirley (Burnette) Powers & Family
Chattanooga, TN
___________________________________________________________
FROM DON HICKMAN:
Mr. Robert C. Deering was a brilliant classroom teacher and an extraordinary basketball and football coach.  At Douglass, the athletes never called him “Coach Deering.”  I suppose it was out of respect for how he handled the classroom.  I marveled at how he stood before our biology class and rattled off information.  He never looked down at his notes or the textbook.  And, when someone came up with a wild guess to one of his simple questions, he’d always come up with a profound statement.  My classmates will remember his remark to Jim Nash—“it’s better to keep your mouth shut and be thought a fool, than to open it and remove all doubt.”  His half time speeches to the team can’t be printed today.  I recall that we were a good second half team because his fiery speeches always fired us up (or scared us) into playing harder.  As a member of the Douglass football team, I’ll never forget two nights at J. Fred Johnson Stadium as he stood there in those brown wing tip brogue shoes with his pants leg rolled up. That was his coaching attire.   (You’ll recall we played on either Thursday night or Saturday night back then).  One night at halftime, -- out of frustration with Lucious Stewart’s play—Mr. Deering threw his cup of hot coffee against the wall. 30 players on the team got wet after that one coffee cup splashed against the wall!  Then, what a butt chewing I got from him after throwing a TD pass in the Bluefield game.  We scored, but I hadn’t run the play Mr. Deering called from the sideline.  It made him even angrier when I told him “Pookie” McMiller had actually called the play in the huddle.  Some things stay with you forever.  Mr. Deering always required us to run 10 laps around the Douglass practice field before football practice to loosen up.  (You figure that!).  I hated the “duck walk” and the “crab walk” during summer training; but I never complained to him—no one did.  (No drinking water at practice, but he liked my brother, Jim.  He let Jim sneak water out to us).  How can anyone forget the first year players had to block Doug Releford or Ruben Adams to prove that you were touch enough to play on his football team.  We often scrimmaged against the “old vets” who would come to practice from time to time.  That stopped when Varley Hickman hit one of the old timers and broke the guy’s leg.  (Even Mr. Simp Brown would be out there giving advice).  Mr. Deering allowed me to play QB two years.  It was a humbling experience.  He made sure I knew it wasn’t because of my ability.  He swore I was the only one on the team who could remember the plays and I would tell all my teammates what they were supposed to do.  I believe I can still run tell you how to run T-4 pass, T-8, H and E pass, and F2at8.  And there was the memorable night Mr. Deering ordered us out of the Langston High School gym at half time because the officials were giving us the “home cooking.”  I remember the score—54 to 17.  We had 4 basketball players left on our team who had not fouled out.  I guess you’ve figure out by my comments:  Mr. Deering hated loosing!  He did some celebrated things while he was our coach—but coaches are supposed to be legendary, aren’t they?  As the years have passed, I realize he really impacted my life.  He taught me how to compete.  He made me a tougher player.  Tough enough to go on to college and become an All-American football player.  He made me a better person—more caring and more respectful of others.  Mr. Deering was tough on all of us.  He was firm but fair.  He loved us like we were his children.    And we loved and respected him—and I know his former players and students always will.

"I probably could be a doctor now, if I wanted to be."   I learned about every system in the body from Mr. Deering.... the circulatory, digestive, endocrine, ocular, muscular, auditory, pulmonary, vascular, and not to mention the brain. The weird thing is, I still remember it!!!!

Mr. Deering and Clarence McKnight. If you were there.....enough said!!!

FROM WILLIAM EARL EVANS:
There is a lesson Coach Deering taught me through a simple quote, that I find opportunity to use practically every week with some young person, and on occasion with adults.
He graced me with it one day, when I had come to school without a pen or pencil. He said to me,
“Evans, you came to school without anything to write with.
That’s like a man going hunting and forgetting his gun.”
I never made the connection, but that may have something to do with why I steal pens from bank tellers, department store clerks, and why I horde them when attending health fairs and places where commercial vendors give’m away!!! Damn!!
It was the 1964-65 school year at Douglass High School. I was 14 years old. I’m 60 now. Ummm….46 years ago!
P.S.
He also use to whip my ass in ping pong (table tennis for all you anal types) at the Lincoln Street Boys Club any time he was there…and because he lived in the neighborhood, he was there quite often. He had one of the quickest back hands I’ve ever seen..(still talking about ping pong, y'all)
There’s an African proverb that states,
As long as you remember someone,
They’re not really gone.
PLEASE SEND IN YOUR MEMORIES OF COACH DEERING TO: douglassriverview@gmail.com
Posted by douglassriverview at 10:48 PM