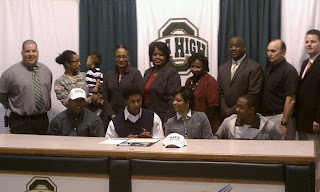 D.J. Beard, a standout cornerback at Ola High in McDonough, Georgia, is one of the Navy's direct entry recruits. Beard committed to head coach Ken Niumatalolo during his official visit to Annapolis on Jan. 9.  A strong student with a 3.3 cumulative grade point average, Beard was also recruited by William & Mary, Elon and Army.

D.J. is the grandson of Douglass Alumnus Helen Bunting of Kingsport.  His father Don is a colonel in the U.S. Army.

"I liked that it's big-time college football and that Navy has been so successful over the years," Beard said. "It's a big relief to get this decision done and know that I'm going to get a great education while playing Division I football."

Beard was a two-year starter at corner for Ola High and was named honorable mention Southern Crescent Conference after recording 45 solo tackles and 15 pass breakups as a senior. The 6-foot, 174-pounder totaled 40 tackles, three interceptions and 10 pass breakups as a junior. He was recruited by Navy assistant Justin Davis, who is now handling the state of Georgia.

"I'm a tough, physical corner that excels in one-on-one coverage. I go after the ball and like making big plays," Beard said.
Posted by douglassriverview at 5:25 PM