Part Five: And Then The Earth Stood Still.. The Day After Eastman Blew Up

The presses were really wound up the day after Tennessee Eastman's aniline plant blew up. 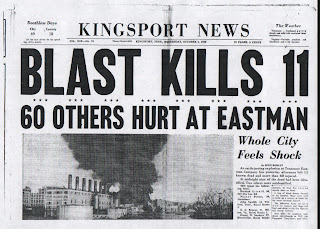 PLEASE CLICK ON THE ARTICLE FOR A CLOSE UP VIEW TO READ
As well, they should be. Up until that time, the Eastman Explosion was the worst disaster caused by Man in terms of lives lost (15 final total), workers injured (at least 60, and many more with cuts and bruises) and property damage (both on-site and off-site), in the history of the state. 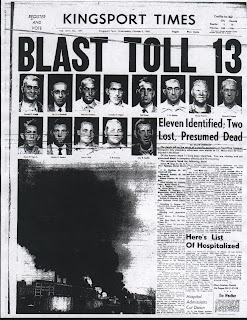 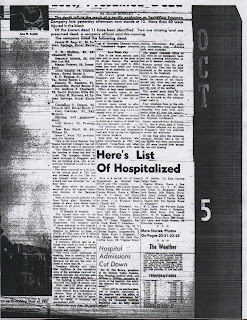 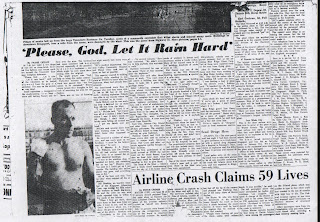 As you'll note, back in 1960, there was practically no general coverage of Kingsport's African-American community; hence, in the articles, there was no mention of the physical damage to the Riverview neighborhood in the aftermath of the Eastman Explosion. There were also not many published eyewitness accounts of what blacks experienced, even though they were the closest to the aniline plant. The only mention found was in one article, where it was written "at the Medical Center, an elderly Negro woman questioned a plant employee as to the safety of her husband. When told the man was safe, the woman seemed near collapse and hysteria." 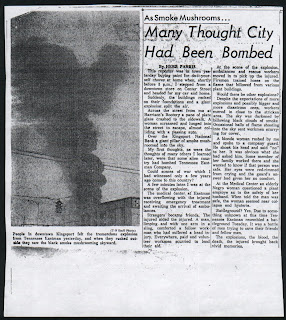 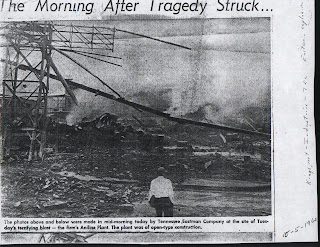 There is no mention of Riverview in any day-after articles, nor in any subsequent stories on the explosion, even though its citizens were equally as devastated as other Kingsport citizens. 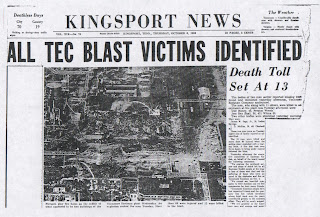 A FOOTNOTE..
Kingsport's Black Community was devastated by the explosion.. being the closest off-site to it, our African-American lives were changed forever. It is unfortunate that the prevailing social winds at the time, did not include pictures from the one neighborhood that was the hardest hit, and interviews from eyewitnesses whom, as you've noted in previous articles on this website, would have provided a meaningful and soulful perspective of what happened that fateful day.

FORTUNATELY, with the Grace of God, we have come a long way towards bridging our social gaps, but UNFORTUNATELY.. there are many MORE miles to go.

---Calvin Sneed
Posted by douglassriverview at 12:39 AM