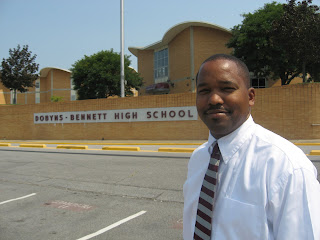 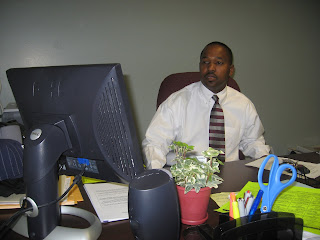 "Each child has the right to reach their full potential, and I am determined to help them reach that."

As our young African-American students at Dobyns-Bennett get ready to "face the music" and graduate into working society, one of the last faces they'll see is that of D-B Assistant Principal Eric Lyons. They'll get life lessons and helpful advice from a former D-B student that has been in the real world they're about to face.

A Kingsporter, born and bred, Eric always wanted to be an educator, and says he was blessed to have great teachers from elementary (George Washington) to middle (John Sevier) to high school at Dobyns-Bennett, where he also played basketball, football and ran on the D-B track team.

"Coach Eggleston was an inspiration to me," Erio says. "I saw something in him that was very positive, that I admired. It was the way he carried himself, how he represented his life and career. I wanted to be just like him," says Eric.

Eric comes back to Kingsport with a broad knowledge of the teaching profession. After graduating D-B in 1990, and later from Lincoln Memorial University in Harrogate, Tennessee, Eric did his graduate work in teaching at Cambridge University"my first three years of teaching were at Austin-East High School in Knoxville," Eric says. He taught Social Studies, American History, Psychology, and Geography to many inner-city children. "You had to have a thick skin," he says, "because many of the kids had street smarts that were difficult to control. They learned very quickly from me that things they learned in the streets, were unappropriate and unacceptable in the classroom."

Later, he joined the faculty at Carolina Forest High School in Myrtle Beach, South Carolina, where he was also the head basketball coach and at the same time, head of the Social Studies Department. That experience convinced him that management and administration was his destiny. "At that point," he says, "I began looking for a school that focused more on education than graduation, and I was fortunate to talk with former D-B and Douglass teacher Jill Ellis, who helped me focus on the right administrative goals."

"Before 'No Child Left Behind,'" Eric says, "the teaching attitude was to just get the child across the stage with a diploma. Problem was, the child could not read. I knew we had to do better than that."

When his mom, our beloved Ann Lyons of Kingsport passed away, Eric and his wife, the former Stephanie Rutherford, started looking closely at coming back home (Stephanie is also from Kingsport). "I came back home with the expectation of making a difference in the children's lives, and I felt if I COULD make a difference, there would be no better place to do that, than the place that made a difference for me."

Once he interviewed at Dobyns-Bennett, Eric says, "just walking the halls reminded him of all the good things he'd appreciated when he was a student. The Lord was very good to me, and I feel blessed to be back home."

As an administrator, Eric says he's still figuring many of the principal-student relationships out, but one thing is certain: "I tell the kids that I never want to feel sorry for them, because freguently as educators, we start feeling sorry for the economic circumstances or ethnicity they have and because of that, we sometimes expect less than the best. I do want to understand how to help the child achieve, but I will set a high standard that is reachable."

"I tell each child that I will show you the way to those goals and help you get there, but much of the work will be your responsibility.. you CAN do it."
Posted by douglassriverview at 10:47 PM