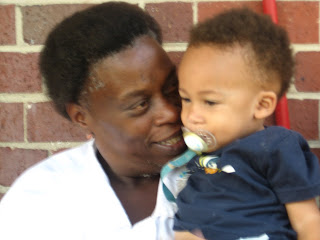 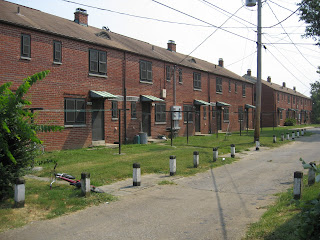 PICTURES OF THE HISTORIC RIVERVIEW APARTMENTS IN THE PHOTO GALLERY

The words of Janet Hoard talking about the Riverview Apartments. She's one of the last residents still living in the apartments, which are scheduled to be torn down soon, as part of the HOPE VI project renovations.

Ms. Hoard, whose family has lived in the Riverview Apartments for more than 40 years, says, originally she had planned to come back when the new single and multi-family housing units are built to replace the Apartments.

"Everybody thought the Riverview Apartments would be replaced with other apartment complexes," she says, "and they all talked about how good it'd be to live in new apartments. They were all taking about coming back.. We felt good about the city helping us with our credit, as long as we had jobs. Then, we found out they were going to build houses on the property instead of apartments, and when we discovered how much they would be to own or rent, some of our credit histories didn't qualify us for the price range of the new houses."

"Anyone with questions are always welcome to contact the Fresh Start Foundation," says Maria Catron, the HOPE VI CSS Coordinator. "It's been an involved process, and we have tried to answer as many concerns as we can."

Of the almost 90 families that were in the Riverview Apartments, 58 families have now relocated to either temporary or permanent housing elsewhere, Ms. Catron says. 30 families are yet to move.

Somewhat unusual are the number of families that moved with a voucher that allows them to move back into the new housing that will replace the Riverview Apartments.
That number is only 2 so far. 20 to 25 families are interested in using vouchers to move back.

Ms. Catron says, once relocation is complete, demolition of the Riverview Apartments will begin, and right now, that is scheduled for the spring of next year.
On another topic, she says the City of Kingsport is leading the efforts on the planned renovation of the Douglass School building. Several funding sources are being pursued, and a definite time frame for its renovation has not been established yet.

"We certainly encourage as many families to return to the renovated Riverview housing as possible," says Ms. Catron.

Meanwhile, Ms. Hoard says she doesn't plan to come back.
"Even though I have a job, there's no way I could afford the rent or the house note on one of the new houses to be built," saying that she thinks many of those new houses may go to Eastman employees. Meanwhile, she says she's nervous about moving from Riverview, since "most of my friends and neighbors have already gone." She's hoping to get into either the Robert E. Lee Apartments or the Dogwood Apartments, which is closer to her job, she says.

"I hope my new neighbors are nice," she says. "But I'm sure gonna miss Riverview."
Posted by douglassriverview at 8:52 PM