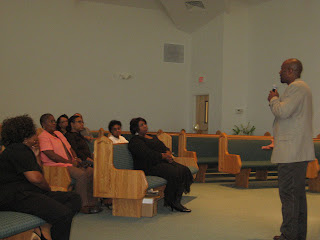 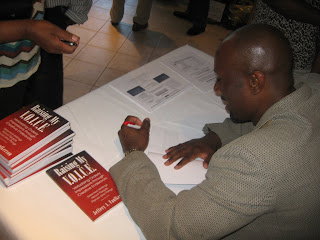 "It would be easy to claim that our parents have failed our children, but this would fall short of the truth.
While our parents share a portion of the blame, I think many of our children have betrayed themselves by making ill-informed decisions."

Appearing at his home church, the Central Baptist Church in Riverview, Jeff spoke to the group about why we focus so much on our differences, and not enough of our similiarities. The book prompts serious dialog about the way children are brought up these days, and how to use the Power Of God through a two-parent system to make a positive difference in the child's life.

Coming from a single-parent family with two other siblings (headed by our beloved Mary Catherine Dulaney), Jeff was introduced on the program by his father, Alan Faulkerson. Jeff told the group how his struggle to forgive his father for leaving the family, has now developed into a true love and personal yearning for his father to be part of his life. Giving honor to Christ for making that forgiveness happend, Jeff says he discovered the true power of Christ at a critical point in life, after suffering through bad grades at the University of Tennessee-Knoxville. It was at that point he developed a rededication of his life to God, changed his focus, and decided to devote his life and career to re-examining mother-father relationships that cause children to lean more to negative influences, rather than positive ones.

His son Caleb, who accompanied his father to the speaker's podium, is a precocious three-year-old, who, like most youngsters his age, is busy testing the limits at which discipline is administered, and in "Raising My V,O.I.C.E," Jeff's expertise in family relationships is relayed in practical solutions that earns respect FROM the child, and at the same time, builds respect in the parent FOR that growing child.

At one point while reading a passage to the audience a chapter in the book "Real Men Change Diapers," Jeff was moved to tears, proclaiming that his son will never know what it's like to not have a dominate male role model in his life, and how he as a father, will always be present. How parents can see the future looking into their children's eyes, and thinking how the possibilities that future may hold, motivates parents to be there for their children, to impart knowledge and wisdom.

The program also featured musical selections from the wonderful voices of Ms. Laynnettee Alley and Ms. Huetta Isom. After the program, Jeff signed copies of the book for local residents.

The book "Raising My V.O.I.C.E" is a must-read, not just for parents raising children to be successful members of society, but also for non-parents seeking to understand why some of our neighborhood children don't live up to their potential, always TAKING FROM from society, and not CONTRIBUTING TO society.