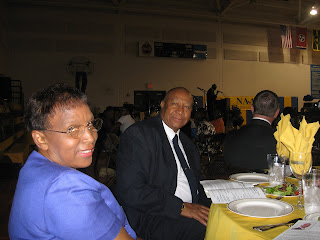 Jeannie and Willie Hodges of Kingsport listen to the Reverend Charles White at the NAACP Freedom Dinner Saturday, September 22, 2007 at the Carver Center in Johnson City.

PHOTOS OF THE FREEDOM DINNER IN THE PHOTO GALLERY

JOHNSON CITY - It was a rousing speech by the Reverend Charles White Jr. that roused lots of applause and occasionly brought the delegates to theri feet, at the NAACP Freedom Dinner Program at the Carver Recreation Center in Johnson City.

The dinner was one of the highlight events of the 61st Annual Convention of the .Tennessee State Conference of the NAACP, which had chosen historic Jonesborough, Tennessee for its annual convention.

Rev. White is the Deputy Direfctiro of the NAACP's National Field Operation in Baltimore, Maryland.

Rev. White reminded the delegates of the mission of the NAACP, and encouraged them to continue fighting for human rights. Regarding the situation of the "Jena 6" in Louisiana, he said it is unfortunate, but not surprising that in the 21st century, African-Americans are still yearning for justice. 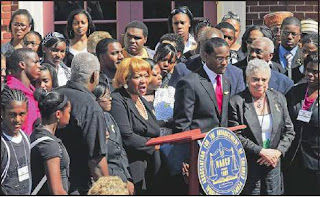 JONESBOROUGH — The final day of this year’s NAACP meeting promoted youth issues, and took on overtones of a different era.
Held at Jonesborough this year, the 61st annual Tennessee National Association for the Advancement of Colored People conference focused on the degrading, defaming and disrespect the African-American community faces in the media and those attending offered support for the Jena Six. They are a group of six black students in Jena, La., who have been charged with attempted second-degree murder in the beating of a white classmate in Decemb e r.
The case of the Jena Six brought forward issues of racial inequality in this country decades after the Civil Rights Act was passed, culminating Thursday with a march in the small town of Jena.
“Today the NAACP stands in solidarity as we ask every person of goodwill, from every religious and ethnic group to stand with us in the name of freedom and justice,” said Gloria Sweet-Love, state conference president.
She urged all in attendance to speak to their representatives about the case.
“Continue to gather signatures to send to your congressperson and senators to ask them to pressure the attorney general to intervene in these cases,” Sweet-Love said. “Continue to spread the word and facts of this injustice in your community. Continue to encourage all citizens of goodwill to become a part of NAACP, to fight the injustice in our justice system. Continue to ask everyone everywhere you meet to stand up for justice and civil rights. To stand up for what’s good and right in our America.”
Monet Brown, vice president of the Tennessee state conference’s youth and college division, reminded all in attendance that the 21st century should not be a repeat of the 20th.
“We would like to remind Jena and the rest of the nation that it is 2007, not 1957 and not 1967, but 2007. And the NAACP says, we ain’t going back.”
Christy Turner, with the Tennessee NAACP’s Memphis Youth Council, spoke about the STOP Campaign, which seeks to stop the negative images sometimes portrayed about black history and culture in media.
“It’s a campaign to get violence and degradation of our people out of the media and the minds of American,” Turner said.
Brandon Harris, Youth Council president, said the images in popular media like rap and movies portray poor role models, and do not promote education.
“We’re trying to change the perception of us, because right now we have role models and kids look at them as drug dealers and people in jail,” Harris said. “Role models need to be people like doctors, lawyers, people of upstanding c h a r a c t e r. ”
Alan Prigmore and Whitney Brazell, both East Tennessee State University students, attended the convention.
Prigmore thought that people needed to be more educated about what they hear, especially in music.
“I just personally feel that you don’t have to be influenced by what you hear, because if everybody believed what they heard, the world would be a lot worse than it is,” he said, referring to derogatory and suggestive music lyrics.
Brazell said it’s important to be educated about how to interpret everything in the media, and thought that equality in America is better than it was decades ago, but the NAACP still has a vital function.
“I don’t feel like there’s ever going to be a time when we should stop,” Brazell said, of supporting civil justice and human rights.
Posted by douglassriverview at 1:36 PM