Legends In White---How It Came To Be 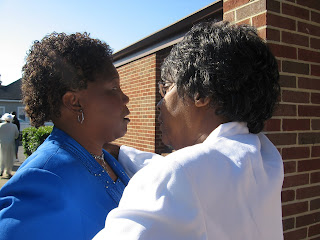 Sisterly Love is a Christian non-profit social organization, whose goal is to help and give back to the community in a loving and godly way. This group was formed by the late Karen Schofield seven years ago.

In Karen's Honor, Sisterly Love gives a scholarship each year to a deserving local high school graduate, and this year's Legends Ball will serve as a fundraiser for this cause.

Other charitable projects that Sisterly Love has contributed to in the past include, supporting local battered women's shelters, donated backpacks filled with school supplies to underprivileged children at local elementary schools, provided financial assistance to fire and flood victims, prepared Thanksgiving baskets for needy families, made financial donations toward funeral costs, and sponsored a contest in the Litte Miss Vision Pageant.

The Kingsport members that would eventually former Sisterly Love, had an opportunity to watch an episode of "Oprah" entitled "Oprah Winfrey's Legends Ball." Oprah threw a spectacular event to honor African-American Woman who have paved the way for others.

Each of Sister Love's eight members were given an opportunity to chose three women to be honored. They choose women who had worked hard, women with backbone, not afraid to look life in the eye, women who offered them friendship, women with a ministering spirit, women who had encouraged them, women who prayed for them, and many other inspirational qualities within. Also, an honorary honoree, Kathryn "Chi Chi" White, who has been there for them time and time again, will be included in the celebration.
Posted by douglassriverview at 1:05 PM