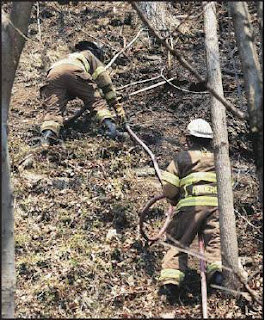 Kingsport firefighters had to contend with flames and some steep terrain as they battled a brush fire Wednesday along Industry Drive. In the picture immediately below, a firefighter hoses down a section of the brush fire. At right, firefighters carry equipment up the embankment. They estimated the grade of the hillside at about 75 degrees. A spokesman for the Kingsport Fire Department said the fire may have been started when a car left the road and its exhaust system sparked a fire in leaves beside the roadway. Far below, the fire burns up the hillside. 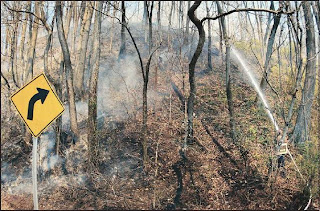 The location of the fire was just at the big curve on Industry Drive, just down from Johnson-Hilliard, Inc. Betty Klepper, a secretary with Johnson-Hilliard on Industry Drive at Wheatley Street, told me the firefighters had a difficult time with the blaze, because many of the surrounding trees were dead, and they were having to work uphill around them. Some of the dead trees caught fire, too, she said, in addition to the dead leaves around them. That part of Clay Hill is one of only three wooded areas that remain between Riverview and Industry Drive. 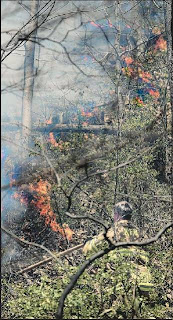 AT LEFT, THE FIRE CLIMBS THE HILL. AT RIGHT, THE GROUND UNDERNEATH THIS PART OF CLAY HILL, CAUGHT FIRE IN 2004. BAYS MOUNTAIN IS IN THE FAR BACKGROUND 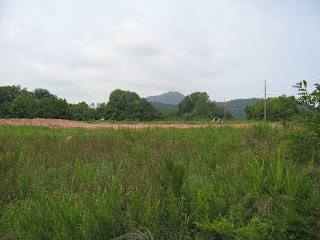 Many folks in Riverview remember back in 2004, when the ground underneath Clay Hill caught fire. Yes, believe it or not, the UNDERGROUND caught fire behind Dunbar Street, and Kingsport firefighters were called to the top of Clay Hill behind the Dobbins-Sneed homes to put it out. That particular fire underneath the green overgrass in the picture on the right was especially dangerous because of chemicals in the ground had apparently come in contact with each other and ignited. Firefighters were forced to soak the ground with water, and let the fire burn itself out, which it finally did.
Posted by douglassriverview at 10:21 AM