For years, the Douglass High School Alumni Association met in homes in the Riverview Community. When that wasn't feasible, board members met in the fellowship halls in local churches, notably the fellowship hall at St. Mark's Methodist Church on Maple Street.

A DOUGLASS ALUMNI BOARD MEETING AT ST. MARK'S 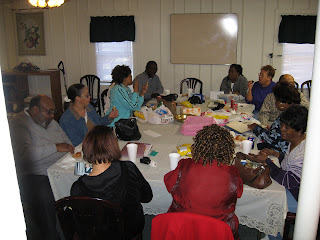 Next year, the group will be moving to a permament home, and it's fitting that new home will be as close to the old Douglass High School as it can possibly be.

It's going to be inside the newly renovated building, right on the first floor.

Discussions by the City of Kingsport about renovations at Douglass, have always included giving the Alumni Association space in the building, free from rent. 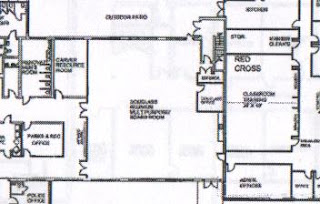 Blueprints now show the new home for the Douglass Alumni Association on the first floor of the current school building, to the right as you enter the building from Louis Street. The Association office, complete with furniture and a computer, will be inside a large, new meeting room that will also serve as a community and board room for the non-profit agencies that will also be in the renovated building.

"For that combination meeting-board-community room," says architect Dineen West, "we are planning to knock out walls on the first floor between the front entrance and the auditorium for the Douglass Alumni Association. Inside that area, their office will open up into the room, where there will be one free-standing display case for the historic Douglass Trophies, and one wall-mounted display case for trophies and other Douglass and Riverview exhibits. The United Way will also have access to the room, along with closet space, and one long counter with a sink for coffee, doughnuts, snacks, that sort of thing."

"Immediately adjacent to that area would be the Carver Resource Center, that replaces the Carver Library. That area will have computers, tables, chairs and books on employment and self-help resources. The meeting-community-board room will
have two entrances that open to the outside..one at the front of the building beside where the auditorium doors are now, and one on the backside that opens up into the courtyard. City Manager John Campbell suggested the asphalt area back there be torn out, and replaced with grass, landscaping, park benches and picnic tables." 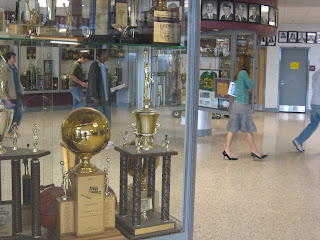 "For the Douglass trophies, we have designed two different showcases, to be custom-built just for them," says Mrs. West. City Manager John Campbell had suggested, one of those being a see-through type case (similar to the ones in the picture at Dobyns-Bennett).. one that can be seen both from the entry way at the building entrance, and from the community-board-meeting room where the Douglass Alumni Office will be. Then, there
would be another combination trophy-display case adjacent to the wall, where there would also be check-in desks for U.E.T.H.R.A. and Parks and Rec. We decided on two separate cases, based on the number of trophies and sizes that you provided us. There will also be spaces within the room, for art displays, community exhibits, children's work, things like that. I'm still planning on supplementing the walls of the renovated building with old black-and-white photos of Douglass and the Riverview Community."

"We're also looking at special lighting issues outside and for the neighborhood," says Mrs. West. "We want to involve the Douglass Alumni Association in that, for community-themed events. The outside light poles would have banner holders, and for events the Alumni would notify the city public works and banners would be placed in those holders, announcing a special event, commemoration or celebration. That type of display has worked in many other cities, and it really changes the look in downtown Kingsport right now, especially with park benches and new lighting. We would like to extend that to Riverview, and the Alumni Association would be in charge of it, helping make the community look really sharp."

The new combination meeting-board-community room that will host the offices for the Douglass Alumni Association will also require moving room where four Headstart classes now meet. 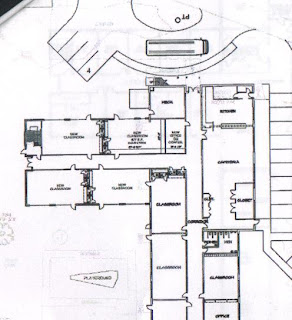 DOUGLASS TENNIS COURTS, WHERE THE NEW HEADSTART CLASSROOMS WILL BE BUILT 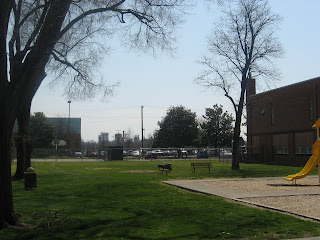 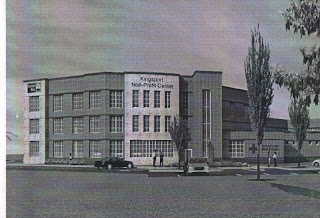 As planned, the old Douglass Auditorium will be torn down and replaced with a three-story tower, that will house the United Way, and many of the various agencies that receive funding from the agency. There will be offices for the Literacy Council, Contact Concern and others. 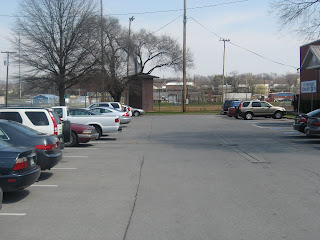 COMING SOON: ARTICLES ON THE PROPOSED DEMOLITION OF THE HISTORIC DOUGLASS AUDITORIUM
Posted by douglassriverview at 8:20 PM