In commemoration of the 40th anniversary of the Rev. Dr. Martin Luther King, Jr.'s assassination in Memphis on April 4th, 1968, Kingsport's black community joined with the white community the following Sunday, April 7th, to march for peace in his honor.

The picture and the text of the article below was published in the Kingsport Times-News the next day, April 8, 1968.

400 March in King Memorial
NO INCIDENTS

Down the center of East Sulivan Street they came, as naturally as they would have taken a walk on any sunny Sunday afternoon.
They marched five and six abreast, falling into step easily and their number filled the length of the entire block.

There were about 400 participants in Kingsport's first demonstration march, Safety Director Jim Eisenbise estimated, and about 50 of them were white.

No grimness, no shoving, no shouting marred the memorial program for Dr. Martin Luther King. They didn't speak much along the route, perhaps because of the occasion, but more likely because a mile is a hefty hike on a warm day, and it was easier to do it silently.

But there was no need for words or placards anyway--black crepe paper arm bands clearly announced the purpose of their journey to Church Circle.
The Negroes gathered first in Riverview for a prayer service and were joined there by several whites, among them two Catholic nuns and Rev. Douglas Berndt, pastor of St. Paul's Episcopal Church.
Rev. Brandt fell in step with Rev. John Price, pastor of St. Mark's Methodist Church; and Horace Curry, president of the local NAACP chapter; and the three of them led the way through the railroad underpass to Market Street.

They were met there by police cruisers which escorted and followed them the length of the march--up Maple to Center and East Sevier, on past the Safety Building, where the flag flew above their heads at half-mast.

City policemen and sheriff's deputies were stationed all along the way. They stopped traffic at the intersections, patrolled back and forth in motorcycles, and paced the sidewalks in an impressive display of preparedness.

However, not a single incident, not even a sour look was reported during the hour-long march, Eisenbise said.

At Church Circle, the marchers gathered around the center traffic island for a brief program. They offered prayer, paid tribute to Dr. King, and sang "My Country 'Tis of Thee" and "Battle Hymn of the Republic" before marching back to Shiloh Baptist Church on East Sevier.

It was for this last quarter mile lap that their ranks swelled to about 400, as Church Circle spectators stepped off the curb to join them.

Among the group was E. L. Scrantom, Kingsport county court magistrate, whose district includes Riverview.
Scrantom didn't want to walk, he said, "because I'm opposed to all marches on general principle. I had to wrestle with my conscience to come today, but I decided it was my responsibility to the people I represent."

There were young people and old people in the march, but most of them were married couples with children running at their heels to keep up.

One Negro teenager with a broken leg hobbled along determined to make it to the finish. He did. 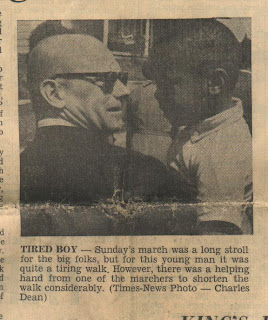 When a little Negro boy whimpered with tired legs, a white man hoisted him over his shoulder and carried him to the church where, with much hand-shakinging all around, the marchers dispersed.
Posted by douglassriverview at 9:09 PM