‘When someone sits down, and they eat so fast they can’t get the plate quick enough, you know people are hungry.’
— Geraldine Swagerty 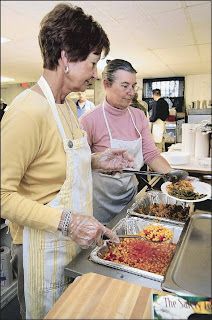 Erica Yoon —eyoon@timesnews.net
In photo above, Chris Terry and Judy Weinhold of St. Dominic’s Church serve patrons at the Kitchen of Hope on Tuesday.


KINGSPORT — From trying to keep everyone who walks into her soup kitchen fed, to allowing a homeless man to use her church’s front stoop as a bed, Geraldine Swagerty is fighting for the people she says are being forgotten.
“This has been the toughest I’ve seen in a long time for us,” said the founder of the Kitchen of Hope in downtown Kingsport, a project of her Full Gospel Mission Church.
Food supplies for the Kitchen of Hope are razor thin, Swagerty said. And donations from companies and individuals are also down.
“(A local dairy) that usually gave us about 20 gallons of milk a week has had to cut us down to 12 a week because of their costs. I tell you, I just don’t know what to think at this point about our future,” said Swagerty.
“We get ahead in some ways, and then with regulations we have to follow, those costs eat us up and that leaves us with a bare-bones budget to try and buy food with. Those churches around town still help us out with donations, but with prices the way they are now for the food, that dollar doesn’t go as far.”
A series of loans obtained through banks and other agencies have kept the Kitchen of Hope afloat, but Swagerty has taken that financial step so much over the years another loan is not feasible at this time.
But Swagerty isn’t ready to close the kitchen doors, she’s hoping that some caring organizations or private individuals can help her get through the coming winter months. 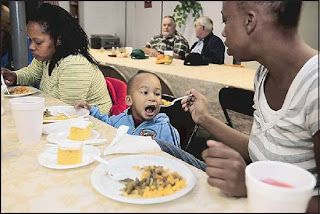 Erica Yoon —eyoon@timesnews.net
In photo above, Kelly Miller feeds her son Jesurun, 2, as Shiree Hutchinson eats in the background Tuesday afternoon at the Kitchen of Hope. The three have eaten at the center three or four times a week for the past two years.


“It seems like we see more people when it starts getting colder, but the way things are nowadays, we are seeing people of all ages who need something to eat,” said Swagerty of her clients, who sometimes start lining up an hour before the kitchen opens at 3:30 p.m. each afternoon.
“When someone sits down, and they eat so fast they can’t get the plate quick enough, you know people are hungry. These are elderly people, and even little ones, some as young as 2 and 3. You can’t let them starve.
“I’ve got to keep going, though. The Lord put me here to help these people out, and if all I have to serve is green beans and a slice of bread, I’ll do that and tell people that we’ll try and get more.”
The kitchen can accept monetary donations at this address: Full Gospel Mission, c/o Kitchen of Hope, 740 E. Sevier Ave., Kingsport, TN 37660.
Other organizations that help the needy are also seeing increased numbers of people seeking help.
Cindy Risk, who heads up Hunger First on Myrtle Street, said people who never before had to ask for help are asking n o w.
“People are being laid off. Jobs are just not as available as they used to be,” Risk said.
“The need is increasing, and it’s going to be greater as we get into the holidays.”
Risk said the organization is called Hunger First, but the services it provides go beyond providing meals. Risk and others at Hunger First provide clothing as well.
“For me it’s difficult to walk away from any of these situations. I’ve been homeless. I’ve been a single mom,” said Risk, who has been with the organization since it was formed in 1998 as the Tennessee Hunger Coalition.
People who would like to help can take donations of food or clothing to Hunger First at 829 Myrtle St.
“Our biggest need right now is boys clothes and adult males of all sizes. We need teenage clothing for boys and girls too,” Risk said.
Monetary donations can be mailed to: Hunger First, 829 Myrtle St., Kingsport, TN 37660.
Hunger First will host a holiday celebration on Nov. 22 at Cloud Recreation Center from 1 to 4 p.m.
Risk said a meal will be served, and there will be presents for children, entertainment and door prizes.
Posted by douglassriverview at 10:03 AM