HOPE VI Houses Under Construction on Sherwood, Hiwassee in Kingsport

Six of the new homes could be ready for occupancy in January.

KINGSPORT — The HOPE VI houses along Sherwood and Hiwassee are all under construction, six potential owners are in line for loans and nine more are under contract, a Kingsport Housing and Redevelopment Authority official said last week.

The HOPE VI project is a $30 million redevelopment project taking place in two Kingsport neighborhoods — Riverview and the Sherwood/Hiwassee area of town. The project began more than two years ago when the city received $11.9 million in HOPE VI revitalization funds from the U.S. Department of Housing and Urban Development.
Riverview Apartments have been demolished, and next spring work on building 32 homes on the site (along with six additional homes in the South Central community) is expected to begin.
The more visible phase of the project is the construction taking place along Sherwood and Hiwassee. In September 2007, 29 homes were demolished with plans to build back 24 new, affordable home ownership units.
HOPE VI Director Doris Ladd said all 24 houses are under construction, in one phase or another, and that six could be ready for occupancy in January. The homes were supposed to come online in July and be done by December, but delays in construction and with HUD pushed the timetable back. 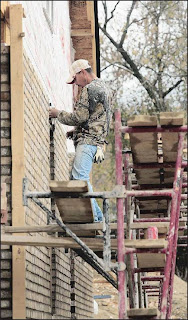 “They are really in finishing the insides and out, putting in the porches and the driveway. We’re awaiting the cabinets to be delivered, which should be the first of December,” Ladd said. “I think, assuming no weather, we should have several coming off and ready to go early next year.”
When the KHRA began the HOPE VI project and demolished Riverview Apartments, the agency laid out guidelines on who would be offered a chance at purchasing the new homes. The KHRA first offered the new homes to displaced Riverview residents, then to residents living in other housing developments or Section 8 housing, then city and county employees, and finally the general public.
Ladd said of the 15 tentative contracts the KHRA has for the new houses, one is a former Riverview resident, some are from Section 8 housing, a couple are city or county employees, but most are coming from the general public.
“We’re seeing a pretty good mix (of people applying) — some seniors, young single moms and some families,” Ladd said. “We didn’t have many apply at all (from Riverview). We offered it, but not too many applied.”
There are two main requirements for getting on the list for the new houses — no one in the household could have a house in their name within the last three years, and certain income levels had to be met — a single person could not make more than $26,050; a couple $29,750; and a family of four $37,200.
The houses are approximately 1,400 square feet, a story and a half, brick with vinyl siding in Colonial and Craftsman style, with three bedrooms, two baths and a storage unit in the back yard.
Ladd said the houses appraise at $145,000 to $157,000. HOPE VI funds are being used to subsidize the loan down to $130,000. At that point, the loan gets cut into two parts. Ladd said Eastern Eight is working with the Tennessee Housing Development Agency to obtain zero percent interest mortgages up to $110,000. The second 30-year mortgage, to cover the remaining $20,000, is with another group and does include market rate interest rates.
Ladd said the KHRA does an affordability analysis for each potential owner, which states the mortgage payment cannot be more than 30 percent of their total income.
“We’re guarding against what you’re seeing going on in the world,” Ladd said.
Posted by douglassriverview at 10:00 AM