Sprucing up Riverview for Spring, Starts in the Fall

One of Kingsport's newest parks, is one of the first to get the makeover treatment, and dozens of volunteers helped get it started.

The Jalissa Ferguson Park in the Douglass Ballfield was mulched with fresh clippings, and Kingsport Parks and Recreation says, fall is the time to do it. 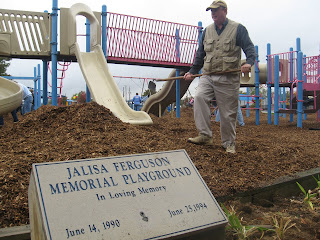 "This is the time of year when it's cool, and you can mulch and plant seasonal flowers, like you would do in your own garden," says James "Moose" Henry with Parks and Recreation. "If you cover up the bulbs with mulch, they'll grow through the winter and poke out with flowers in the early spring. The mulch under the swings and jungle gym sets will settle and keep the dirt underneath from spreading and forming holes in the ground when it rains." 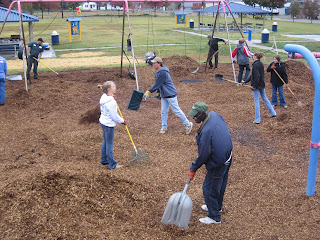 The job of spreading bags of mulch was bourne on the backs of about 40 to 50 volunteers, who helped Parks and Rec employees get the job done. "We've got young kids and old kids all out here helping," says Moose. "They furnish coffee, doughnuts and snacks for everybody, and it's a pretty festive atmosphere. With so many folks helping, it gets the job done a lot faster and we're thankful for the volunteers to take their own time and come out to help us. Without them, it would take a lot longer to get finished." 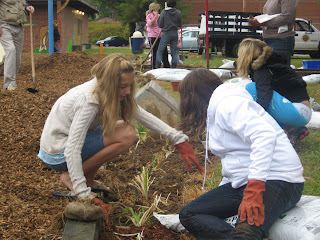 "It's colder today, and there's some people sweating and their noses running, but they're staying well and the mulch is getting spread," he says.

Every Kingsport city park gets mulched and planted twice a year, and the Jalissa Ferguson Park and the Dale Street Park are on the second-year cycle. 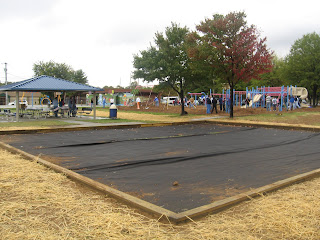 The Kingsport Rotary Club, who also had some of its members out spreading mulch, is donating more playground equipment to the Riverview park. Their members are donating the concrete work and the labor, and right now, they are waiting on two pieces of equipment to arrive, so they can install it. "The Rotary Club has been great," Moose says, "and we are really blessed that they've been willing to come out, see what we need, and help us get it done for the neighborhood. They've donated money, and helped us really get the park fixed up." 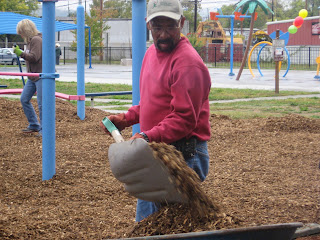 "The mulch and the plantings beautify everything," Moose says. "When they closed up the (Riverview) Apartments, we thought everything was just going to be left behind, an old vacant lot, with nothing done to keep it up. This effort really shows that somebody's willing to come in and help us keep it going. It really makes it look nice." 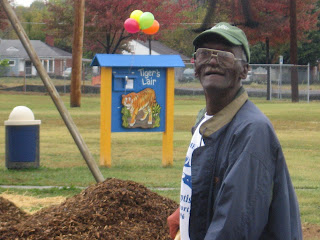 News about the great things happening in the Douglass Ballfield is really getting around, with the Splash Pad, the playground and the new shelters that are now up. Moose says, "We've had folks come down here from Virginia who say they've heard about it, and they wanted to experience the calm of the neighborhood and the excitement of the Splash Pad. Then, there are the other things going on, the new homes going up for HOPE VI, the renovation of the V.O. Dobbins Center."

"We're going to have a lot of good things, and they'll be great for the neighborhood."