‘Now that some good people have given us money to go forward, we’re going to be able to feed people for a good while.’
— Geraldine Swagerty


This Story Courtesy the Kingsport Times-News By KEVIN CASTLE
kcastle@timesnews.net

KINGSPORT — Some generous donations this holiday season will help feed many mouths at a local soup kitchen. 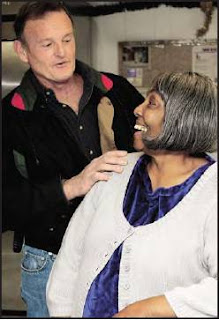 Because of shrinking donations and supplies, Geraldine Swagerty was facing possibly closing the doors of a facility she and the Full Gospel Mission Church opened in 1999. But Swagerty’s prayers were answered earlier this month.
“It was a blessing, a gift from God,” said Swagerty, referring to several financial gifts sent to the Kitchen of Hope, which serves daily hot meals to the needy.
“It gives you hope to see all these people coming to our aid. People still care about people. I knew they always did, but God has to show you an
example of that to let you see it with
your own eyes.”
She said several contributions were made anonymously, while other donors came right into the kitchen to find her and give her the money, including Steve Huff, whose Kingsport plumbing company has been doing annual repairs at the Kitchen of Hope free of charge.
“We have a jar that we put out in the main office every year, and guys put in a dollar or their spare change every day. Near the end of the year we decide what to do with the money we collected, and this year we thought the Kitchen could use it,” said Huff, who delivered more than $250 to Swagerty earlier this week.
Every extra penny counts in this operation, where Swagerty digs right in with the cooks in the kitchen, as well as acting as her own delivery service for supplies.
“Sometimes I’ll borrow a truck to go over to buy some food and plates over in Johnson City. I don’t have a specific place to go sometimes, just where the bargains are,” said Swagerty.
“Usually, I have to make two or three trips over there in my car. But that has to be done. Otherwise we wouldn’t have any food to cook some days, and goodness knows we have enough mouths to feed, hungry people to feed.”
The Kitchen of Hope has had to undergo several projects in the past 18 months including having new concrete put down to seal cracks and meet health department regulations.
“People are struggling just like we are, and they have little ones to keep fed. They’ve told me they’ve gone without so their kids will have a meal for a day,” said Swagerty.
“Now other people can’t do that because they don’t have the money for one meal. But now that some good people have given us money to go forward, we’re going to be able to feed people for a good while.”
Evergreen of Kingsport owner Henere Valk said they are planning to help the Kitchen of Hope financially by presenting holiday workshops today at 10 a.m. and 2 p.m. at the store at 1413 Riverport Road.
There is a $30 donation per person to participate in the workshops, which will provide each person with a centerpiece or wreath. All of the money collected will go to the Kitchen of Hope.
For more information on the workshops call Evergreen at 245-4769 or visit its Web site at www.egardenplace.com.
Contributions to the Kitchen of Hope can be made to: Full Gospel Mission, c/o Kitchen of Hope; 740 E. Sevier Ave.; Kingsport, Tenn. 37660.
Posted by douglassriverview at 8:37 AM