"Joy To The World-Togetherness In Riverview": CBS Christmas Day Concert

"Reverend Stokley was pretty good about spotting young people who were not doing something in the church," says Bernice Horton. "He could look at a child and watch them, and he'd know right away what role they needed to play in the church." 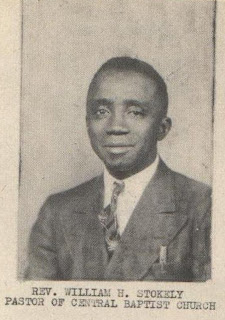 "If you were not contributing, Reverend Stokley would find a place for you, something in the church for you to do. I miss that about him."

Mrs. Horton made that observation, as she waited in the audience for the Central Baptist Singers Alumni to present their annual Christmas Day program at the Central Baptist Church in Kingsport for 2008. This year's theme was "Joy to the World: It's Not About Us, It's About Jesus." 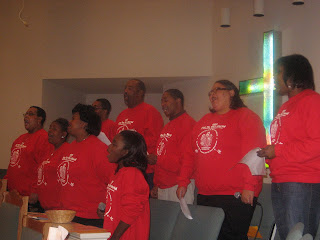 "All of the CBS Singers remember their upbringing," she says, while listening to Christmas music in the santuary. "They've all grown up over the years, growing closer, their voices getting better, and their relationship with the Lord becoming part of their lives."

After the opening Scripture from Minister William Dennis and Prayer from Pastor Patsy Swagerty, the Princesses of God made their Processional into the santuary, to the delight of the audience. A wonderful selection followed from the Joyful Angels proclaiming the show theme "Joy to the World." 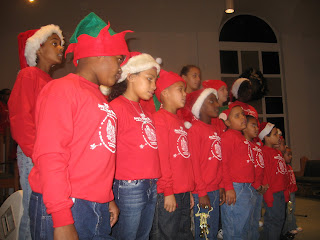 The New Vision Youth Kids recited a Christmas cantata, using the Spoken Word to deliver the message of the Birth of Jesus. Director Johnnie Mae Swagerty once again demonstrated the power of the Church in the lives of children, who accept Christ as Lord and Savior.

The CBS Choir also showcased its talents with "You Are Holy, Lord," and "Great is Your Mercy." Then came an inspirational saxaphone selection from Casey McClintock, and a Praise Dance from Lolita Dukes. "It's inspiring to me to see the changes in Gospel Music these days," says Mrs. Horton, herself a veteran of more than 25 years of singing in the Central Baptist Church Senior Choir. 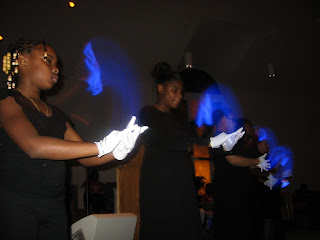 "We didn't have dancers back 25 years ago in church," she says, "but now we do. They allow the children to do interpretive dances like the Bible speaks of, and the music that they're dancing to has changed. It's just good to see a chance, and different interpretations of the Bible."

The musical group Transition also sang a new wave gospel song, that had the audience singing along with the members. It combined a popular song with gospel, with a bit of rap music put in for the young people influence. It was a big hit with the crowd.

Arron Howard also displayed his talents as a saxaphone player with a gospel rendition, which also displayed the influence of popular music with Christian music. 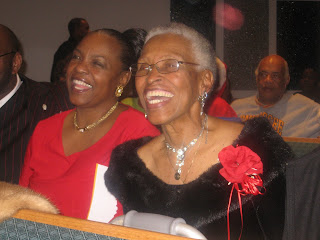 One of the highlights of the program was the announcement of the first annual Mrs. Pinkie Horton Scholarship Fund. The scholarship is dedicated to our own Mrs. Pinkie Horton, who along with Mrs. Bernice Horton, also sang in the Central Baptist Church Senior Choir, one of the most popular church choirs in East Tennessee's African-American community. The $1,000 dollar scholarship is actually a dual scholarship of $500 dollars for a lucky girl, and $500 dollars for a lucky boy, who send in written essays to qualify for the funds. The winners will be announced during the CBS Gospel Explosion planned for next August. 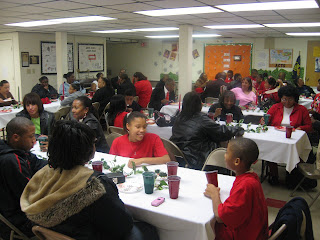 After the concert, a reception was held in the Central Baptist Fellowship Hall, with delicious food and punch. Especially moving was the birthday cake to our Lord and Savior Jesus Christ, which capped off a wonderful evening of song, dance, inspiration, tribute, and community fellowship. 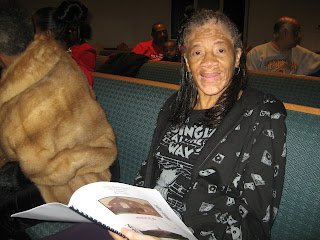 "These events are always good for the community," says Mrs. Horton. "There are people who don't get out much, but they're here tonight, and we thank Lisa Williamson for that. I'm old school, and she gives the children in the church something to remember, like Bible lessions.. little things you take for granted. "Jesus Loves Me, This I Know, For the Bible Tells Me So." Those kids, when they grow up, they're never going to forget that. Same thing with Johnny Mae Swagerty and the New Vision Kids. They'll study those lessons more, and will be more prepared for the lives ahead of them. 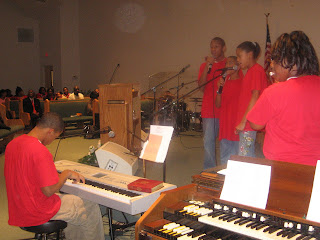 "There'll also come a time when they'll be ready to pass down what they've learned, to the next generation, just as they are, OUR next generation right now," says Mrs. Horton.

"Right now, they're getting the right teaching. Just like Reverend Stokley would have liked."
Posted by douglassriverview at 5:14 PM