Kingsport Kitchen of Hope: 'My Heart is Full'

Kingsport, Church Hill students become guardian angels for Kitchen of Hope
‘They really found out about the true meaning of giving for this time of year.’
— Lesley Counts

This story courtesy the Kingsport Times-News, by KEVIN CASTLE
kcastle@timesnews.net

KINGSPORT — Geraldine Swagerty couldn’t stop smiling or laughing Monday afternoon. It could have been because the shelves of her soup kitchen were stocked to overflowing.

And it also could have been because of the generosity of more than 50 students from Kingsport and Church Hill paying a visit to the Kitchen of Hope bringing carloads of supplies and checks that will help to pay for many more meals.
“You walk by that pantry now, and I just see it as a work of God. I’m more at ease now, but I just knew that he wouldn’t forsake us or let us go without. He just brought a lot more angels to do the job,” said Swagerty, who started the soup kitchen in the basement of her Full Gospel Mission Church on Sevier Avenue.
It took three vehicles to bring in the donations from Indian Springs Elementary, said third-grade teacher Leslie Counts, whose class voted to forgo a $5 gift for each student in order to turn that money over to the Kitchen of Hope. 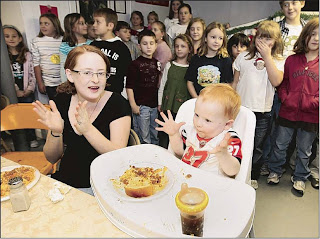 “Well, some of the students were upset that they gave up their gift. But then they saw the donations of food and things coming in, and they told me, ‘Ms. Counts, we have to get more.’ So they got it. They really found out about the true meaning of giving for this time of year,” their teacher said.
The initial project was spread out among the third-grade classes at the school, but Counts said it soon became an effort that the entire school wanted to help in.
“It caught on because other kids saw the fun and the excitement our kids were having bringing in all the supplies,” said Counts, who also presented a check of over $250 to the kitchen Monday.
The girls of the Red Cap Society — a take on the famous Red Hat Society, according to Church Hill Middle School teacher Patricia Johnson — also came to the soup kitchen with holiday cheer in the form of a check for over $200 that was collected by selling homemade Christmas ornaments.
“When other students and teachers found out what the kids were selling it for, they wanted to get as many as possible so the money would go to the kitchen,” said Johnson. 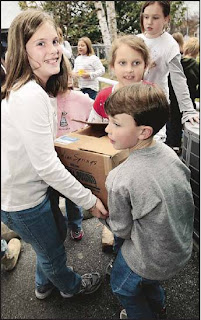 This club at Church Hill Middle School has taken on projects for the past three years to raise money for such groups as the Church Hill Community Chest, Hawkins County Animal Shelter, and raising more than $1,000 that went to a fund that benefited the late Erin Page, a student at Robinson Middle School who passed away earlier this year.
“We do what we can with the little club, but the kids cannot wait to help others. I think it is a great sign for our community’s future that this many kids care about others and will step up and do something,” said Johnson.
Swagerty says her high stress level has been taken down many notches since the beginning of the month, thanks to the kindness of so many.
“This is God’s message working through this shelter. People helping people. That’s what he put us down here to do, and you can tell that people are getting the message,” said Swagerty.
That message may have come through one of the Indian Springs third-graders, who whispered to her mom, “My heart is full,’’ after seeing the food being delivered.
Swagerty couldn’t agree more.
Posted by douglassriverview at 10:46 AM