Second phase of the project includes 32 similar homes to be built on the old Riverview Apartments site.

KINGSPORT — All of the 24 new homes being built along Sherwood and Hiwassee will be under contract by the end of the month and will be ready to occupy by May, Kingsport housing officials announced Thursday. 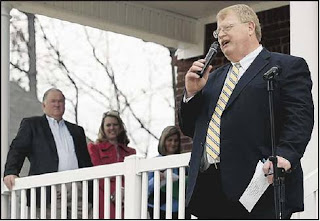 The Kingsport Housing and Redevelopment Authority held an open house for three of the new houses Thursday afternoon and announced the near completion of this first phase of the HOPE VI redevelopment project.
The HOPE VI project is a $30 million redevelopment project taking place in two Kingsport neighborhoods — Riverview and the Sherwood/Hiwassee area of town. The plan calls for replacing old, run-down structures with new, affordable houses. 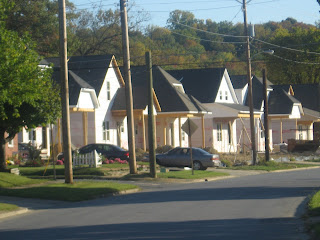 The neighborhood of Sherwood and Hiwassee has been completely transformed through the HOPE VI project, with old, small, one-story brick houses and duplexes (most of them rental properties) replaced with new one-and-a-half-story homes.
Linda Calvert, chairwoman of the KHRA board of directors, said the HOPE VI project has been a worthwhile journey.
“As we initially reviewed and researched the concept and took many field trips to Washington, D.C., and other places, it was like the little engine who said ‘I think I can,’ ” Calvert said. “And then as funding was awarded and construction began, we can now say, ‘We know we can’ and look around us and see the results.”
The HOPE VI project began more than two years ago when the city received $11.9 million in HOPE VI revitalization funds from the U.S. Department of Housing and Urban Development. Since then the KHRA has worked on phase one of the project — the replacement of 29 houses along Sherwood and Hiwassee with 24 new, affordable homes. 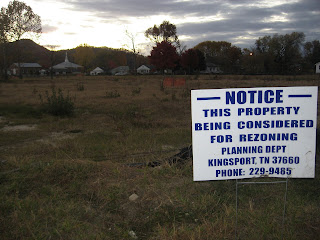 The second phase of the project — expected to begin in June — calls for 32 similar houses to be built on the old Riverview Apartments site with six additional houses built in the Riverview community.
Mayor Dennis Phillips said only two years ago the people of Sherwood and Hiwassee came before the city with concerns over their neighborhood, how it was nothing but rental properties and that they were afraid to drive down the streets.
“Through the HOPE VI grant we were able to improve this neighborhood and be able to turn this into home ownership instead of rental properties,” Phillips said.
The houses along Sherwood and Hiwassee come in five models, with four named after notable families from Riverview (Blye, Dobbins, Douglass and Pierce). The fifth is named Cunningham after KHRA Director Terry Cunningham.
The houses are one and one half-story, 1,450 square feet (on average), three bedrooms, two baths, with appliances, central heat and air, and a storage shed in the rear. About six or seven of the houses are not yet completed, but should be so next month.
The houses have a market value of $145,000 to $157,000. Through grants and subsidies, the KHRA was able to get the finance amount down to $130,000, and qualified applicants could also receive $7,500 for down payment assistance.
Doris Ladd, HOPE VI director, said the project has been a lot of hard work, but also fun and a blessing for the neighborhood.
“We worked very hard in presenting (the houses) to people, taking it out to the community, and showing the benefit of owning a home almost at the same cost of renting,” Ladd said. “It was such a blessing to provide this opportunity to people. I think once people understood the opportunity, they very quickly wanted to participate if they qualified.” 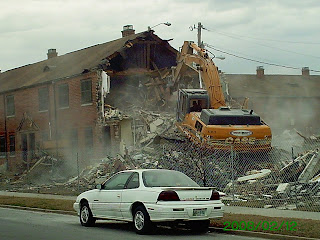 When the KHRA began the HOPE VI project and demolished Riverview Apartments, the agency laid out guidelines on who would be offered a chance at purchasing the new homes. The KHRA first offered the new homes to displaced Riverview residents, then to residents living in other housing developments or Section 8 housing, then city and county employees, and finally the general public.
Ladd said of the 23 houses under contract, seven are former KHRA residents, two are city employees, and 14 are from the general public. Ladd noted the “really good mix” of people purchasing the homes, including a bachelor, a single mother, an Asian couple with young children and a few retirees. 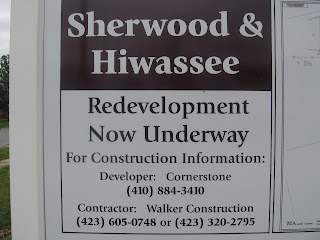 There are two main requirements for getting on the list for the new houses — no one in the household could have a house in their name within the past three years, and certain income levels had to be met — a single person could not make more than $27,450; a couple $31,350; and a family of four $39,200.
Posted by douglassriverview at 9:48 AM