Bids to Renovate V.O. Dobbins Center Come In Under Budget

Low bid is around $1.5 million less than the $8.4 million original estimate.


KINGSPORT — Bids for the renovation of the V.O. Dobbins Community Center came in $1.5 million under budget, with work expected to begin this month on the expansion.
The V.O. Dobbins Center is a city-owned community center located between Louis and Wheatley streets in Riverview. The building served as Kingsport’s “blacks only” school from 1951 to 1966 and was named Douglass High School. 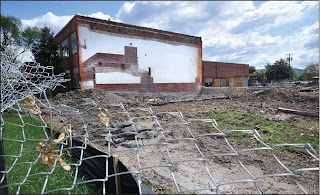 Kingsport plans to expand and renovate the center, demolishing 13,600 square feet of the existing building, renovating the remaining 46,000 square feet, and adding approximately 50,000 square feet.
Due to cost, the auditorium is being demolished and in its place a new 28,000-square-foot, three-story nonprofit wing will be built. Nonprofits slated to go into the new wing include the United Way, Upper East Tennessee Human Development Agency, Mountain Region Speech and Hearing, Kingsport Tomorrow, Big Brothers/Big Sisters, American Legion, the regional branch of Susan G. Komen for the Cure, ALS and the Palmer Foundation.
Six construction firms bid on the project, with the low bid coming in at $5.9 million.
The remaining five bids ranged from just over $5.9 million to $6.2 million. After adding in $480,000 for architectural fees and $400,000 for the demolition, the bid is around $1.5 million less than the $8.4 million original estimate.
“We have been saying for some time as a result of the regional and national economy, you’ve got contractors who are looking for work, and we’re seeing regional contractors coming in and looking at jobs they’ve not looked at in the past,” said Chris McCartt, assistant to the city manager. “And the cost of material is down from when we did the last estimate in September 2008.”
Earlier in the process, Kingsport sought $1.4 million in New Market Tax Credits to help offset the cost of the project. McCartt said the city opted to not seek those credits but is looking at them for other projects.
“We didn’t see it working for this job. A lot of it was timing. You’ve got a certain time to get the applications in, and we were having to wait until the new allocations came in. It just did not fit in with our schedule.”
Kingsport bonded $7 million for the project, and due to the low bid the city has about $300,000 to $400,000 in unused funds, which could be used for other amenities at the center.
“We’re weighing out the options. There are some things in the project that were not included in the bid package — additional cosmetic enhancements to the building, ceiling tiles, new flooring, doors, various little amenities,” McCartt said. “We might repaint the existing gym and replace lights. We’re looking at green space, resurfacing the tennis courts and do work on the basketball courts.
“We’re working on estimates for those.”
Demolition on the auditorium should wrap up in the next two weeks, and then the project will be handed over to J.A. Street and Associates, which will begin construction by mid-May. Kingsport hopes to open the new facility in July of next year, just prior to the beginning of the Head Start classes in August. 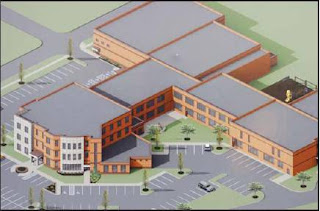 Other highlights of the new center include Kingsport’s Head Start education program being located in the new education wing, a community computer lab will be located at the Carver Branch Resource Center, a new basketball gym will be built with the existing gym refurbished, and a branch of the Kingsport Senior Center is expected to open in the building.
The city is allocating space, computers and furniture for the nonprofit Douglass Alumni Association and the Sons and Daughters of Douglass Web site free of charge.
McCartt said $60,000 is also available for public art at the new center.
“There could be a sculpture on the campus, or one idea being explored is the spiral staircase from the auditorium. ... We’ve made an attempt to salvage that piece.”
Posted by douglassriverview at 11:56 AM