New Road Extensions In Kingsport; What Happened to Lincoln/MLK?

"I think we really need to look and see if extending Martin Luther King Drive to downtown Kingsport can be done." 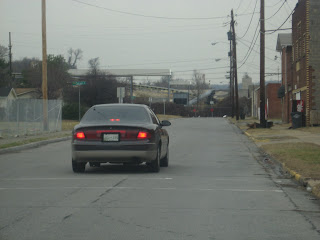 When Lincoln Street in Riverview was renamed in honor of the Reverend Doctor Martin Luther King, Junior a year-and-a-half ago, Mayor Dennis Phillips enthusiastically proclaimed the need to investigate extending the street to Cherokee Street at the CSX-Clinchfield Street Crossing, beside the Kingsport Chamber of Commerce. Right now, the street dead-ends at its intersection with Dunbar Street. That route, the only one possible, would take a direct path through the General Shale Brick property, which is now wrapping up its operations in preparation to shut down the plant permanently.

"It brings back downtown and gives those who are leaving Eastman an ability to go downtown, to Netherland Inn or wherever they're trying to go," said Rev. Ronnie Collins with the Tennessee-Virginia Fellowship against Racism, for a Kingsport Times-News article. In the article, Mayor Phillips also said the extension has been talked about for a long time, and that he'd be in favor it it, if the city could possibly do it. 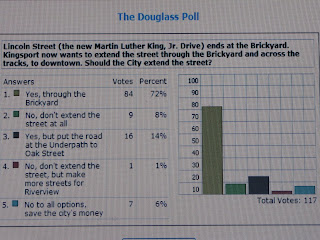 A poll recently taken by the Sons and Daughters of Douglass website for the Douglass High School Alumni Association, shows overwhelming support for extending the street through the General Shale property. 117 people voted in the unofficial poll, with 84votes, or 72% of those voting, saying the city should extend Lincoln/ML King through what alumni used to call the "Brickyard" to downtown. There were 16 votes, or 14% of the total votes, to extend a new road where the Underpath is right now, from Lincoln/ML King to the corner of Main and Sullivan Streets across town. There were also 9 votes, or 8% of the total vote to not extend the street at all and save the city's money. Only 1 person, with 1% of the total voted to forget extending Lincoln/ML King, but build more streets in Riverview.

Now, on the other side of town, comes news that the city is exploring new routes to connect Stone Drive West with the new development along Netherland Inn Road (see following article). Any route chosen would cross the railroad track on the west side of town. The most traveled route is a grade-level crossing at Lilac Street, and improving that crossing or even an idea to tunnel under the railroad track is being considered, at a cost of millions of dollars. 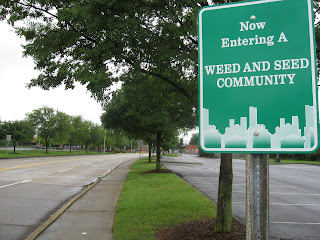 So with all that planning work being looked at.. what's happened to the proposed extention of Lincoln/M.L. King?

"It's my understanding that we are still in the conceptual stage," says Chris McCartt, assistant to the Kingsport City Manager. "Even though General Shale is no longer making bricks at its plant, any street extensions onto their property would have to be with their permission. It's my understanding that the mayor has had some conversations with General Shale, but nothing definite has been decided yet."

"It would be easier if we knew what Shale plans to do with its property," he says. 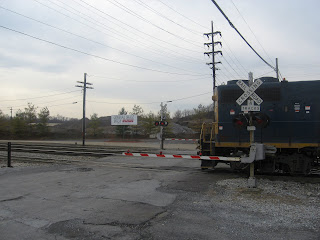 There is another issue that Kingsport has to look at, with any kind of street extension, and it involves a business partner that's been in the city, longer than the city itself.

The C-S-X Railroad, formerly the Clinchfield.

The city says, C-S-X Railroad has made no secret that it would like to close the Clinchfield Street crossing that, right now after a sharp left turn, only leads to the General Shale plant after the rail crossing. That only leaves two alternatives to extending Lincoln/ML King to downtown.. either a bridge over, or a tunnel underneath the tracks near Clinchfield Street. Either of those would cost too much money for this kind of project, McCartt says, with other things considered.

"It wouldn't make sense to bridge over the tracks," he says, "because you have to consider a bridge that would be as tall as some of the buildings downtown. It would definitely be on the skyline, and you have to consider how that would change the historic look of downtown. A tunnel underneath the tracks would require a lot of room for down and up approaches, and while it wouldn't change the skyline, tunneling would take up a lot of space that just isn't available." 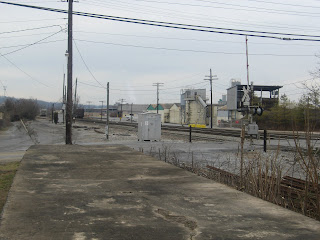 "Keeping the crossing at Clinchfield would seem to be the only feasible option," he says.

Calls were made to the C-S-X Railroad headquarters in Jacksonville for this article, and none of those calls were returned, specifically about the future of the Clinchfield Street crossing.

One thing that makes a Lincoln/Ml King extension into downtown more important, is the forthseen increase in vehicular traffic into Riverview, once the V.O. Dobbins Sr. Community Center is renovated into Kingsport's non-Profit center. Presumably, people from all over the city will flock to the center, through Lincoln/ML King and Wheatley Streets, the only two streets that come into Riverview right now. 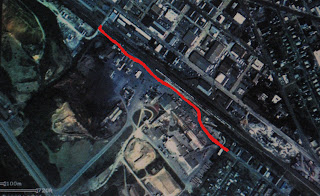 "We are definitely not giving up on extending Martin Luther King Drive into downtown," McCartt says. "As far back as anybody can remember, nobody can ever remember when Lincoln Street ever connected to downtown, even though an extension seems an easy thing to do. We haven't moved it to the front burner, because we have a backlog of roads that have not had a lot of attention. It's traffic congestion in other parts of the city that had top priority, but I do expect that to change." 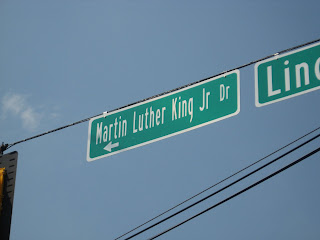 "Extending MLK into downtown will be something that has to be considered. The timing has just not caught up with the need yet."
Posted by douglassriverview at 9:56 PM