"It just gets bigger and better every year, Praise the Lord."

That's the assessment of the annual Little Miss Vision Pageant, held this past Saturday, June 27th, 2009 by its director Mrs. Lillian Leeper.

The event was held in the auditorium of the Kingsport Rennaisance Center.


The contestants ranged in age from 5 years old, on up to 12, and brought girls from around Kingsport who showed off their poise and presence to a packed house. A panel of 5 judges, graded the ladies on their charm, their ability to "wow" the crowd, and their power to hold their poise, as hundreds of eyes watched their every graceful move.

"Some of these girls have never been recognized for their achievements," says Mrs. Leeper. "Many girls would love to get up on stage and tell you who they are, their accomplishments, their goals and their aspirations. As we follow them, with their parents' help and the community, and God's with them, they do make it. Along the way, you've got to show them some love, some attention, and show them that they can indeed do it. As President Obama says, "Yes.. we CAN."


First, the girls came out on stage, introduced themselves, told a little about what they liked to do in their spare time, and then had the stage all to themselves, casually showing off their adventurous sides. The audience of mostly people from the Riverview and South Central Kingsport area, had their favorites, but all the girls received warm, loving encouragement from the crowd.

The girls also performed a dance skit together, which got rave reviews from the judges. 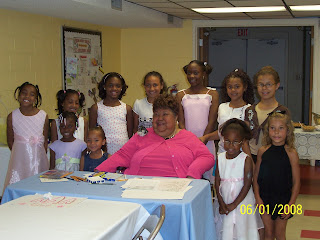 Last year, the girls spent a few hours with Mrs. Jill Ellis, who spent time teaching them the finer things of life, including grace, respect for themselves, and the proper way for young ladies to carry themselves in the world. "We were so blessed to have Mrs. Ellis help us educate the girls on poise. She just said 'we're going back to old-school with these girls.' They came in with a lot of new attitudes, but Mrs. Ellis said 'we're going to mix a lot of the old with the new, and teach these girls some self-respect. The girls picked up a lot of pointers from their old-schooling with Mrs. Ellis. They came away, very proud of themselves."

While the girls were getting ready for their various stage events, the audience was also wowed with a singing performance from Ida Machen, music director at Central Baptist Church, and musical praise dancing from the groups "For His Glory" from Kingsport, and Nevaeh from Gate City, Virginia. Also, the New Vision Youth performed a recital.

The ladies did the pageant proud with their runway performances, as they came out, dressed in elegant fashionware, and strolled along the stage, to the delight of the audience and the careful notices of the judges. The confidence they displayed during this particular outing, sent the judges adding numbers like crazy, as they tallied up points that would ultimately lead to the 2009 Little Miss Vision winner.

Every year, the pageant awards a scholarship to a deserving college-bound student, and this year's winner is Phillip Hamilton. "He is a very extraordinary man," says Mrs. Leeper. "When you read his biography sheet and see where he came from, where he stopped at and then, where he began again with God's Grace and Mercy, you just had to give him a helping hand. On his application with us for the scholarship, he noted that he had been out of town helping to build a house for a needy person. This young fellow has been up against all odds, and now he's just turned it around with the help of his church and elsewhere."

And then, came the moment of truth. The 2009 Little Miss Vision, Miss Elisabeth Brice came out, took her final walk along the runway, and continued to amaze the audience with her charm and grace.


After Miss Barlow's name was called as the 2009 winner, she took her victory walk, and then, in a scene reminiscent of the big televised beauty pageants, she was then mobbed by the other contestants, all of them getting a hug in and words of congradulation.

"This program is all about doing what's right for these girls," says Mrs. Leeper, "doing what we are supposed to do for the girls of our community. It's what our elders did for us when we were growing up."


"Yes indeed, the pageant does get bigger and better," says Mrs. Leeper. "We've got plans to get our girls on professional floats in Kingsport's 4th of July Parade and the Christmas Parade. We're also working on getting our organization non-profit status with the IRS, so that folks who contribute to our programs can do so freely and tax-exempt."


"I'm thinking big, because our girls deserve it."
Posted by douglassriverview at 12:45 AM