THIS STORY COURTESY VINCE STATEN AND THE KINGSPORT TIMES-NEWS

Tuesday’s headline about the closing of Pet Dairy got Jack Pierce thinking about his dad. “You know my dad was the first blacksmith for Pet Dairy. Anytime one of those horses threw a shoe, it was just like if your car had a flat. They’d come and get him.” 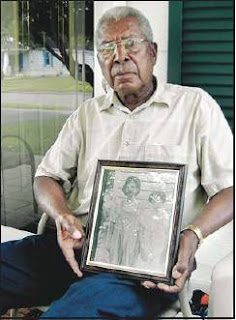 Jack was the youngest of 13 children, and when his mother died in 1932 when Jack was 3, it was left to his father, Albert Pierce, to raise the family by himself, on a part-time blacksmith’s pay. “If everything went well he worked just once a week.” The rest of his time he farmed.
Because the blacksmith’s job was part time, Jack says, “We never had any money. But we always had plenty of food.”
And plenty of love.
Jack grew up in Old Kingsport on a street with five other families. “None of us had any electricity. We used kerosene lamps. And no phones. I was pretty old when we finally got a phone.”
That meant that when one of the horses that pulled the old milk wagons threw a shoe, someone from the dairy would have to drive to the Pierce home, rouse Albert and take him down to the dairy stable downtown.
And “rouse” is the operative word. The milk men were out well before dawn delivering their bottles of milk and cream, so any shoeing would have to be done in the early light of dawn.
Occasionally when school was out, young Jack would go and watch his dad shoe a horse. “They were big foot Belgian horses, big horses, not like ordinary farm horses we got around here. I used to sometimes hand him the nails.”
That was as close as Jack got to being a blacksmith. He spent his working life at Eastman.
“Dad and the Pierce family were teamsters. They used to haul Kodak work for Eastman. My granddad and his boys, that’s what they did for a while.”
His grandfather Jerome had been born into slavery in 1844, went off to serve in the Union Army, then came back to the Bays Mountain area. “The old house where my dad was raised is still there.”
Jerome Pierce had five boys and a girl, including Jack’s dad, Albert.
Albert married Lena Fitzgerald around the turn of the century, when the only Kingsport was Old Kingsport, and together they had 13 kids, including the youngest boy, Jack.
Albert and Lena lived on the family farm for a time before moving to a street near the Netherland Inn. That’s where Jack was raised. “We were the only black family in the neighborhood but everyone got along. All the kids played together.”
Then Jack’s mother died in 1932. “Dad had to raise us and that’s what made us so close-knit.”
It worked like a typical big family at the time. “The oldest one looked out for the youngest one. Everybody helped everyb o d y. ”
During the Depression, two of Jack’s older brothers went off to work in CC Camps. CC Camps — Civilian Conservation Corps — were a Depression relief program for young unmarried males. The two boys would send money home. “That made the financial a little better. My dad would sell horses and trade horses. We lived pretty good compared to some folks.”
There was always ham and bacon and all the staples of a farm. “We grew corn and took it to the Gibson Mill and traded it for flour. And Sunday was chicken day. We’d go out in the yard and say, ‘That one looks good.’ ”
Jack always ate well at Douglass School, Kingsport’s pre-integration black school. “I would take jelly biscuits and ham sandwiches. Sometimes I would trade my baloney sandwich to another little boy for his jelly bread. I didn’t know he was getting the best of me.”
As the years passed, the Pierce children left home, one for Connecticut, another for New York, a third for Washington. Soon Jack, the baby of the family, was the only one left at home.
He stayed because his dad was getting older and needed help.
“I remember when he brought his new wife home. I moved out shortly after that because I knew he had somebody to take care of him.”

Contact Vince Staten at vincestaten@timesnews.net or via mail in care of this newspaper. Voicemail may be left at 723-1483. His blog can be found at vincestaten.blogspot.com.
Posted by douglassriverview at 9:09 AM