Congradulations to two Riverview-South Central residents for their accomplishments and achievements.. 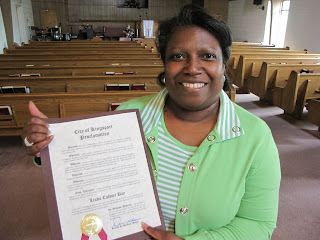 Dr. Linda Calvert had the honor of having May 20th named "Linda Calvert Day" in Kingsport, to honor the contributions she has made, as Chairperson of the Kingsport Housing and Redevelopment Authority Board of Commissioners. Dr. Calvert has the distinction of serving two one-year terms as Board Chairperson. She has been on the Board since 2005, and was asked to serve another term while the K.H.R.A is implementing the HOPE VI Revitilization project at Sherwood-Hiwassee and in the Riverview Neighborhood. She is also the chairperson of the South Central Kingsport Weed & Seed Iniative, the neighborhood anti-drug program that started in 2004. 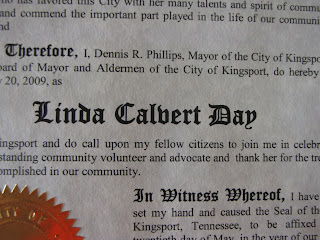 "I believe, as the Scripture says, 'to whom much is given, much is required," says Dr. Calvert. "We should all be servant-leaders in our communities, and our service should not be limited to the church, or just around people that we know. The improvements in our community that come from the HOPE VI grant, and the renovation work at the V.O. Dobbins Center are exciting times for all of South Central Kingsport."

"I appreciate the honor of Mayor Phillip's proclamation," says Dr. Calvert, wife of Rev. Kenneth Calvert, pastor at the Shiloh Baptist Church. "I was pleasantly surprised when told about the award, and I'm very proud of what the programs have accomplished in Kingsport." 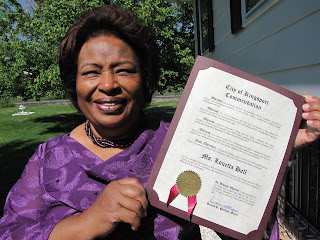 Also honored by the City of Kingsport in a proclamation is Louetta Hall, who volunteers her time during income tax season, for the federal government's Volunteer Income Tax Assistance program. The program helps low-income, elderly, disabled and folks with limited-English skills, receive the maximum refund amount they can get back from their income tax filings. For several years, Louetta has donated her time in this yearly project. 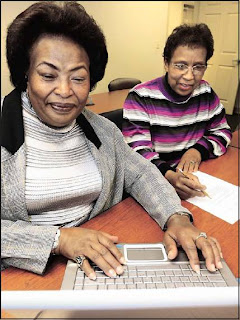 In the proclamation, Mayor Phillips notes that "Louetta's assistance, along with other volunteers, has helped countless people claim the Earned Income Tax Credit refund, resulting in thousands of dollars in tax credits and hundreds of thousands in federal refund checks." Louetta donates many hours helping tax files sift through their documents, then applying those papers to the IRS tax code, and putting many smiles on peoples' faces, as they wade through the tax system.
Posted by douglassriverview at 10:23 AM