RESPONSE FROM GOLFERS PRODUCES HEARTBREAK FOR THE DOUGLASS SCHOLARSHIP FUND


There will be no Memorial Golf Tournament for the Douglass Alumni Association Reunion this year.

The devastating announcement was made by tournament director George Smith, who informed the Douglass Alumni Board of Directors, he had not received a single golf tournament registration by today's deadline, June 22nd.

The event was scheduled for Cattails at Meadowview Saturday, July 4th at 8 AM. 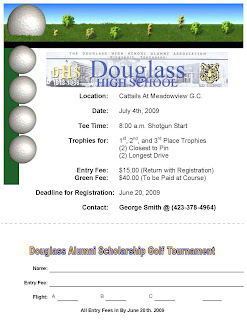 "We had put the applications on the website and passed out flyers," says golf tournament director George Smith. "Today (June 22nd) was the deadline to tell Meadowview what we have, and as of now, we have no golf registrations for the Memorial Tournament at all."

"It's very disappointing," he says. "I don't know if it's the economy or lack of interest. By now, we should have had, and have always had, several players registered and ready to go, but since nobody showed interest, we had no choice but to cancel this year. Maybe in two years, we can think about having a golf tournament, but if the lack of interest is still there, I'd say we've seen the last of the memorial golf tournaments for the Douglass Reunion."

"This year, we also reached out to the Kingsport Ebony Club," says George. "With their Reunion going on and them being a part of the Douglass Alumni Association, we thought it would be good to involve them in the Memorial Golf Tournament. We sent them an application this year to sort of, bring them into the event, and we heard nothing back from them." 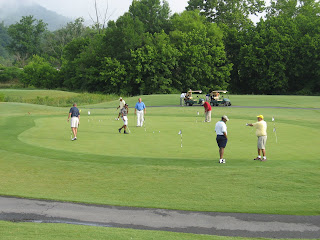 The Reunion Memorial Golf Tournament was also the single largest fund-raising event for the Douglass Scholarships, given out to deserving descendants of Douglass alumni.
That's why the annoucement has led to a lot of disbelief.

"I don't think most people knew the golf tournament registration fees were the source of much of our scholarship fund," says alumni president Doug Releford. "The main purpose of our Reunions has been twofold: one, to re-unite as alumni and fellowship with each other, renewing friendships and relationships. Two, we raise money for scholarships and give them to Douglass alumni descendants to continue the wonderful educaiton they have already gotten, just like we did after we left Douglass."

"That's why the loss of the golf tournament is truly heartbreaking." 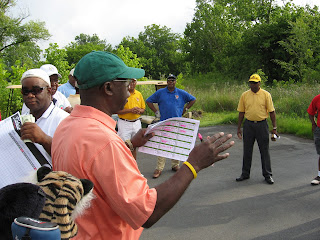 George Smith has organized the past three golf tournaments.

"George graciously stepped in after original tournament organizer Bob Hord got sick," says Doug. "George has really done a good job, and has always been faithful to the Alumni Association on the tournament. I know it's a disappointment to him to have all the publicity out, and nobody respond at all."

"Last year, we had 36 golfers to tee off at Cattails at Meadowview," says George. "It was a great turnout, and everybody had a good time. The golfing stories that got passed around, just showed how well these alumni brothers got along, how well they worked together, and how much fun they had. But now, even if I held the tee times with Meadowview, there isn't enough time at this late date to get everything organized for a shotgun start."

"If some of the guys coming in for the Reunion just want to get together at Meadowview or Warrior's and play a round or two, that would be great," he says. "Just to get together as a Douglass group, would show some kind of unity. Maybe we can try the tournament at some later date. The Scholarship Fund is going to be kinda slim this year." 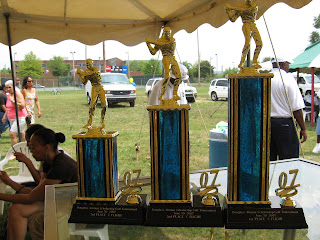 "The awarding of the trophies was one of the main events at Field Day," says Doug. "That's where the golfing stories of the day got spread around. The golfers came back and sort of bragged on each other. We'll miss hearing about who did what, who had the best score, who got closest to the hole, who got the best trophy."

"We have had one Douglass alumnus who doesn't play golf, but donated 250 dollars directly to the Scholarship Fund, and we appreciate that more now than ever," says Doug. "I hope it was just the economy, and not something else. I guess now's the time to appeal to all Douglass Alumni members, that anything they can spare directly to the Scholarship Fund will be greatly appreciated, too. Hopefully, they can open up their hearts and the ir pocketbooks to see what they can do to help us keep our Scholarship Fund alive." 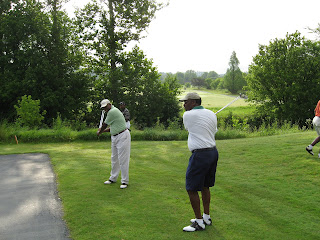 Meanwhile, the Douglass Reunion will go on as planned, from Friday, July 3rd to Sunday, July 5th.
Posted by douglassriverview at 1:06 PM