THIS STORY COURTESY THE KINGSPORT TIMES-NEWS, VIA JEFF FLEMING


KINGSPORT — A new bank opened in town last week. But this one doesn’t offer checking accounts, home loans or certificates of deposit.

Instead, customers will find basketballs, nail polish and art supplies at the new Citizens Bank inside the Boys & Girls Club.

A ribbon-cutting ceremony was held last week to mark the opening of the new bank — named in recognition of Citizens Bank, which contributed a grant to build the facility inside the new Boys & Girls Club.

Mayor Dennis Phillips and officials from Citizens Bank gathered for the occasion along with club officials and news media.

“The number of people who get out in the real world and don’t have any idea how to manage their finances always amazes me,” Phillips said. “It’s a real need, and it’s a need that you all are fulfilling.”

The bank is part of the Boys & Girls Club’s new facilities behind Pratt’s off Stone Drive. The complex replaced an old facility near Holston Valley Medical Center. That building was razed to make way for a new hospital entrance.

Boys & Girls Club Director Chuck Owens said the old building had a “bank” where kids could exchange earned paper bills for merchandise. But the bank was crammed inside a closet at the old facility.

He said that when the club kicked off its $3.5 million campaign to build the new facilities, organizers brainstormed on how to improve the bank and potential sponsors.

“We sat around the table and it came up — wouldn’t it be great if Citizens Bank sponsored this,” Owens said. After all, he said, “it’s about promoting good citizenship. It’s about being good citizens.”

Brad Hoover, senior vice president of Citizens Bank, said the financial institution was founded 75 years ago with the philosophy of giving back to the community.

“And we’re still trying to do that today,” Hoover said. “We hope (the club’s) Citizens Bank will be a cornerstone to the development of the young men and women here.” 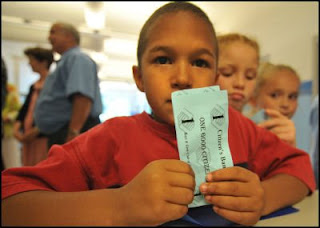 Matthew Miller holds his 'Citizen Bucks' as he tries to decide what to buy at the Boys & Girls Club store. Photo by David Grace.

At the new Citizens Bank last week, children with paper bills in hand eagerly looked over the assortment of goods. The Boys & Girls Club recognizes good behavior and good deeds by rewarding kids with “Citizen Bucks.” The paper bills of various denominations can be earned for making good grades, volunteering services, acting in leadership roles, winning a contest, or being named youth of the week, month, or year. The bucks can then be traded at the bank for merchandise.

Kids not only earn bucks from what they do at the club, but also how they behave in the community.

“A couple of years ago we had a little boy who found a wallet at Christmastime with a lot of money in it. He turned it in, and we gave him bucks for that,” Owens said.

Sherry Owens, Chuck’s wife and a club volunteer, said younger children tend to want to “spend” their bucks as soon as they get them, while older kids learn they can save their bills and eventually trade them in for something of more value. She said it teaches children how to earn money, save money, and spend money.

“It teaches them something about fiscal responsibility,” Sherry Owens said.

Some items in the bank are purchased by Boys & Girls club staff, while much of it is donated from the community.

And in addition to toys, the bank carries school supplies and personal grooming items such as deodorant and toothpaste.

When traveling, she and others from the club collect hotel room samples of lotion, shampoo and other essentials, and pack them into individual kits for the children.

And just before school, the bank will carry school supplies, from notebooks and pencils to binders and backpacks.

Three Dobyns-Bennett High School marketing students also got involved in the project. Jacqueline Buckles, Kendra Brooks and Kelley Combs, who just graduated last week, were never students at the Boys & Girls Club. But they knew about the facility — Jacqueline’s father, John Buckles, is past president of the club’s board. The girls became involved after the Owens spoke about the effort at DB’s DECA Club.

“They presented this opportunity and we thought it would be a good way to help them out,” Kendra said.

The three girls went to work and redesigned the old bucks into Citizen Bucks. They thought of a slogan — “Crank up the Bank” — to mark the opening of the new facility. They designed flyers and invitations for the grand opening, and wrote a press release for the event.

For their work, the girls each earned gold chords to wear at graduation. Jacqueline’s father, John, said he’s proud of all three of them.

“They’re part of an actual community project, dealing with people in the community. It’s great experience for them, and it helps an organization out, like the Boys & Girls Club,” he said. “It showed them they can make a difference in the community. We’re really proud of them.”

The Boys and Girls Club serves the community by offering an after school program for children in kindergarten through eighth grade.