Douglass/V.O. Dobbins Renovations About to Ramp Up

In just a few days, it will be full speed ahead for renovations at the V.O. Dobbins Community Center in Riverview. 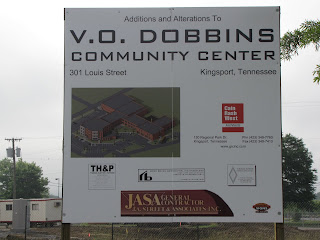 Beginning this week and during the month of July, all the work on every part of the building designated for construction will begin. There will be simultaneous construction, work going on in all of the areas all at the same time. It took quite a bit to get to this point.

"All the demolition work is finished," says Dineen West of Cain-Rash-West Architects, designer of the massive project. "For the past few weeks, we have been hauling away unsuitable soil from the site of the 3-story tower and the adjacent area (the site of the former Douglass Auditorium, James Street, and the homes that used to sit nearby). "The foundations are now being poured, and then we'll drill the pit for the elevator shaft. It will sit in the center of what will be the tower. We're also putting in underground utilities, stormwater, water lines. The power company is moving power poles and getting the power switched over. Visitors will also notice an asphalt binder coat, to be used as a staging area for the contractor, employee vehicles, etc." 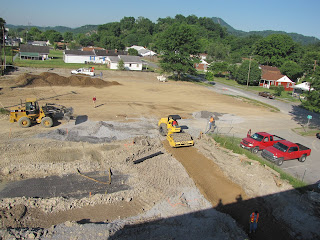 "We've entered a phase where we're trying to do a snapshot of a month or two ahead," she says. "We meet every two weeks and update where we are from there. Right now, we're seeing everything start in July, and in August we'll see where we are."

Uncovering the soil has revealed something Riverview residents have known for years.. it is unsuitable for building sustainable buildings that are designed to last a long time. 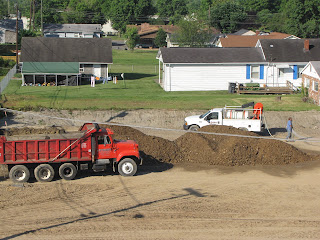 "The unsuitable soil does not meet the bearing capacity that we need for the new building," says Mrs. West. "It was sandy and will not support the steel structure, so we have to haul that soil out and bring in a clay-shell mixtue as a base. We've had an independent testing firm there overseeing the new soil that's going in, which has to be compacted. It has to reach a certain compaction level, and so they've been monitoring that for the past several weeks. The new clay-shell mixture should be able to support a 3-story building."

All plans have to start somewhere, and with the Dobbins/Douglass renovations, they begin with the 3-story tower. 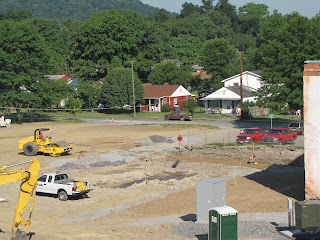 "We are concentrating on the non-profit building first, where the old auditorium used to be," says Mrs. West. "Construction workers will also begin re-roofing the existing building during the summer, beginning in July. Also beginning in July, will be the renovation of the first floor where the headquarters will be for the Douglass Alumni Association, and the Carver Resource Center."

The new retention pond is a new source of consternation for local residents. It's located right off Louis Street, next door to the old Bowditch house. 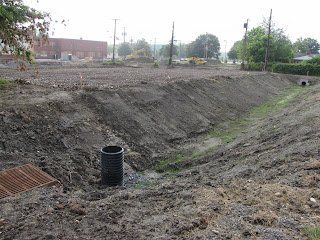 "Everybody was concerned about not having enough parking," says Mrs. West, "so we tried to solve the parking issue and the soil that water doesn't go through very well. We were trying to get as many parking spaces as we could and the new city codes say, if you've got a project where you disturb more an acre of ground, you have to hold any stormwater runoff on your site for a period, before letting it run off. The Riverview community has always had an issue with stormwater runoff and ponding in the streets, and this retention pond will hold a certain amount of runoff before letting it run into the nearest stormwater drain. The resulting retention pond had to be put where it is, because you're not allowed to let storm water flow into the streets.. you have to hold it in an area, until it has time to filter into the drain system." 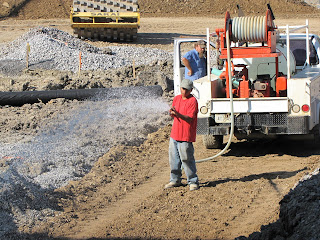 "We will get the first steel on site for the new tower in July, and erecting it sometime in mid-July," she says. "That is the first construction. From there, we will sort of, flow into the Douglass Alumni offices and the Resource Center around the first of July, but no exact date has been set. The building feels like that should be the sequence. After that, we will segue over into the new classroom wing construction for Headstart where the Dobbins tennis courts are, and the new gymnasium will be last." 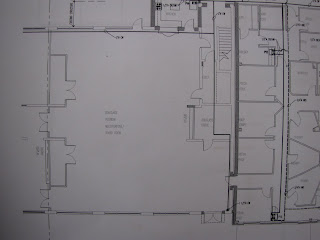 "The Douglass Alumni offices will be an open area with most of the walls on the first floor knocked down," Mrs. West says. "In the Douglass room, we're taking out four classrooms and turning them into one big room. There will also be a seating area with tables for community and non-profit meetings, along with a kitchen area and storage. The Carver Resource Center will actually be an existing room that will be renovated, with no walls torn down."

"The men doing the foundations for the non-profit tower will finish that work at the end of June," she says. "They'll then move around to the classroom wing for Headstart on the back side of the building around the first of July. Other trades will move in after they move out. They have the new classroom construction projected to start around the first of July. The new gym will be the last new construction to begin and we're projecting that to start around the end of July."

"There'll be like three mini-jobs all going on at the same time, the non-profit tower, the Douglass/Carver improvements, the new classrooms, and the new gym all starting, then proceeding all in sequence. There will be lots of activities going on, all at once." 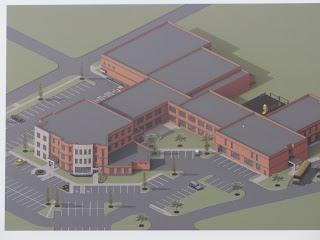 And then.. the fruits of so much labor will be completed. The wonderings and concerns of a neighborhood, the future of the cornerstone of one of Kingsport's first communities will be finished.

"The entire project should be finished by July 1, 2010," says Mrs. West. "One year to the day that most of the major construction begins, and weather permitting, the renovations to the building should be finished one year after it started, and the Douglass Alumni Association, and the other non-profits can move into their new homes." 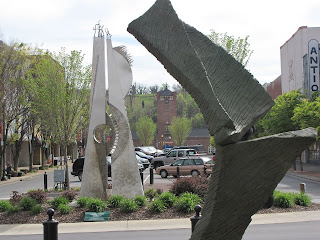 Kingsport has long had a project going on, with various statutes and sculptures around town, catching the eyes and the minds of residents and visitors alike. "They will also be part of the Douglass/V.O. Dobbins Center renovations," she says. "We're looking at different medias that we haven't done before.. some will be photography, some will be oil paintings, others will be wall hangings, murals and scultures. We haven't determined exactly what will be involved, but we do have a subcommittee headed by Bonnie McDonald with the Kingsport Arts Council working on that right now. She is looking for community involvement, with residents helping to choose the various medias, murals, the photos, the scultures, the art work. If anyone knows of an artist in the community who'd like to be involved, please let us know. The artwork will have to be of good quality, so please come forward and make their contribution felt.. Also, if there are any local neighborhood tradesmen who want to contribute and get paid for it, the laying of ceramic tile, mosaics, anything will be considered." 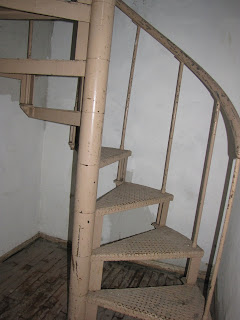 Unfortunately, conspicuously absent from the sculpture displays, will be one of the Douglass School's most historic, memorable and mysterious items.

The historic spiral staircase was not saved by the demolition contractor, and from what we have learned, the specific saving of one of Douglass' most mystical features was not as important to the demolition crew, as it was to most Douglass alumni and Riverview residents. Turns out, the demolition crew was over-anxious to get their job done, as other items requested by the Douglass Alumni Association were also not salvaged, among them, auditorium seats. 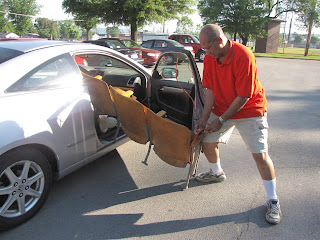 (EDITORS NOTE: After first being told that no seats were available, then just one set was saved, this reporter went over and discovered many seats underneath debris and rubble bound for the landfill, and salvaged them. About 30 seats are now being stored in a safe area).

"Unfortunately, we were not able to save the historic spiral staircase," Mrs. West says. "The demolition people told us they had to cut that out, that it was bolted into the concrete, and in the process of making their deadline, it was destroyed. That's all they said. On the other hand, we were elated to find out that you were able to save many seats from the Douglass Auditorium and secured them for us." 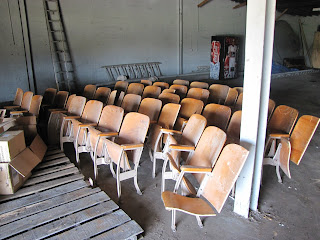 "We will use the seats again around the Douglass Alumni room, along with the photographic memorabilia," says Mrs. West. "We'll try to save some of the character of the building with those items. I'm sorry the staircase did not work out, but we'll try to make it up in other ways."
Posted by douglassriverview at 9:40 AM