The Masons in Riverview: More Than Just A Secret Handshake


Do you know the secret handshake of the Masons?

"No, I cannot show it to you. If you are a Mason, you already know what it is." Orville Bond wasn't about to tell me one of his lodge brothers' biggest secrets. 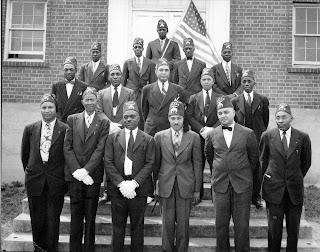 View a slideshow of the historic Masonic Lodge building on Lincoln-MLK Drive by clicking here. 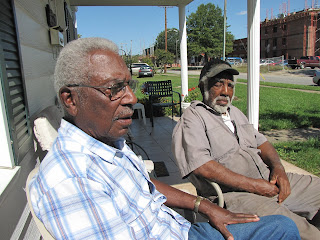 Orville Bond and Jack Pierce were both Masons in Riverview, and one Saturday morning, I found them reminiscing about the historic men's organization that included the fine gentlemen in the above picture, provided by Virginia Leeper. Mr. Bond's reluctance to showing the Masonic handshake was more protective of the organization's respect in the Riverview Community, than indictative of some secret society. 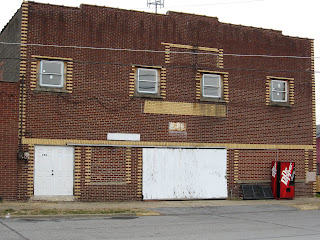 The Riverview Masonic Lodge was the Universal Lodge No. 239 F. & A.M., and the Lucy Crawford Chapter No. 262, O.E.S. The historic lodge building is still standing on M.L.K/Lincoln Street, but not for long. The property may soon be part of the HOPE VI revitilization project going on across the street.

"The Masons were a no-nonsense kind of thing," both Mr. Bond and Mr. Pierce proudly stated. "They were a benevolent group, always helping in the community, and helping their brother in need," said Mr. Pierce. "If you were joining the Masons to party and have a good time, you were trying to join the wrong organization. If your enjoyment was for the good of the community, it was a good thing to be in. But there was no cussing, no drinking, no carousing, no partying. There was a certain way you carried yourself in the Masons."

"You didn't have to command respect," he says. "People saw that around you, and automatically knew that there was something special about you." 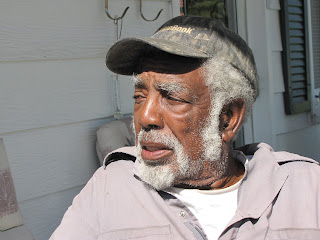 Orville Bond came home from the Army on a furlough back in the late 1940's, and joined the Riverview Masons while home. 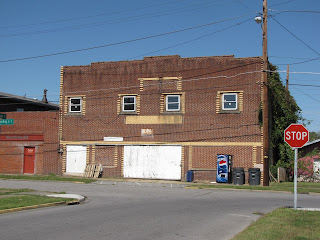 The Masons in the Riverview Community were obviously men of character. "Young men in the neighborhood wanted to be associated with them because they were men of good stature," remembers Jack Pierce, "men that were honorable, men that were respected not just in the Riverview Community, but respected on their various jobs at Eastman, the glass plant, the cement plant, the Press, and elsewhere. The Kingsport lodge also included New Canton, and Rogersville had its own chapter."

The older Masons in Riverview apparently kept a quick rein on the younger men selected to be in the organization.

"You didn't just GET into the Masons," said Mr. Bond. "Oh no...there was a committee that investigated you first. They'd look at your background. Some people were denied that wanted to get it, the Masons would vote on you, whether you got in or not. A certain way they voted, and one vote the other way and you were not accepted. Everybody had to vote positive on you." 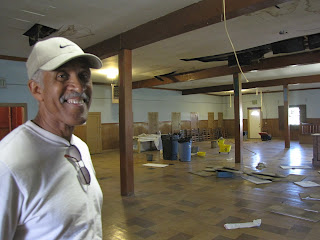 "They really just didn't let anybody in," remembers Van Dobbins Jr., whose beloved father, V.O. Dobbins Sr. was a 33rd Degree Mason in the Riverview lodge, and who, himself, joined the Masons while in college. "To be a Mason, required a clear mind to be able to do the things required of the honor, the different functions involved in keeping a strong lodge. You respected each other, you didn't do many of the things members of other clubs did. It was a much different mindset. There were strict codes of honor." 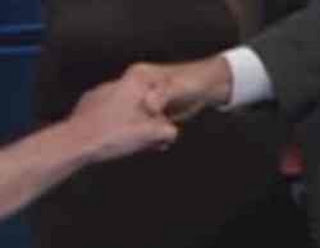 Among those codes of honor was the handshake.

"If I shook your hand and you were a Mason, I'd know it," says Orville Bond. "Words would not have to be spoke..we'd BOTH know it. That meant a different relationship. Even if I came in your house, the way I conducted myself and the way you conduct yourself, we'd know. If a Mason asked you a question, you knew how to answer him." 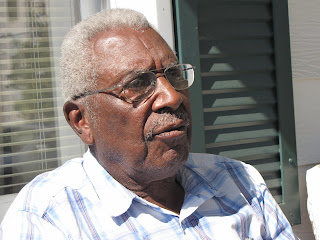 "I have heard of Masons in problems far away from home," remembers Jack Pierce. "Car trouble on the road, something where you needed aid. If the man who stopped to help you gave you the secret handshake, they'd recognize each other as Mason, even though they were total strangers. Bottom line...you'd get whatever you needed to take care of the problem. If it was a car problem, not only was it a repair shop to fix it, but the money to fix it if you didn't have enough. White Mason, Black Mason...it didn't make any difference. Once the handshake, they'd never leave your side until the problem was fixed. 'NEVER FORSAKE EACH OTHER' was the way I heard it." 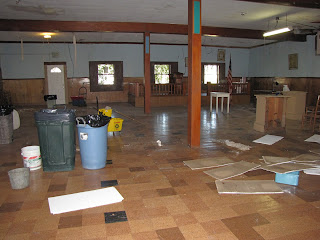 The code of Masonic conduct included many other things, too. A tour of the old two-story Masonic Hall in Riverview reveals some strange observations, to the untrained, non-Masonic eye. 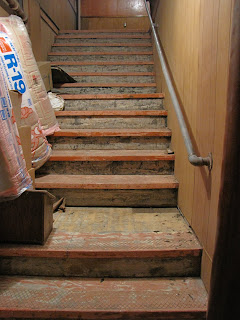 And then...there were the steps to the second floor, which are still there. These were not regular, ordinary steps.

"I helped Mr. (C.C.) Kizer build those steps up to the second floor," he says. "They were alternated, all the way up. There were 3 first steps, then a platform, then 5 steps, and another platform. Then there were 7 steps the rest of the way up." 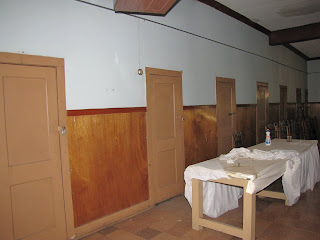 Even upstairs on the second floor, were signs of secrecy. Closets that were not numbered in sequence the way numbers go.

"The closets, the stairs, the way you carried yourself, even small things like the handshake...those were things that signified you as an upstanding gentleman," remembers Van, Jr. of the old Riverview Masons. "Your word was, and still is, your bond as a Mason. There were certain things expected of you, and the Masons provided you all of these mental tools to be able to carry yourself with dignity. To be a Mason required a clear mind to be able to do things required of the honor, the different functions involved in keeping a strong lodge." 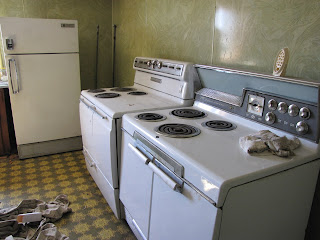 Just walking around the still-standing historic lodge itself is a reverent experience. The old kitchen where many feasts were prepared for banquets, Christmas parties for the neighborhood children, and just quiet suppers for the needy of the community is still intact, along with the original stoves, the original refrigerators, sinks and cabinets.

Oh.. if those utensils could talk... The historic walls could probably do some talking, too. And a whole lot of bragging. 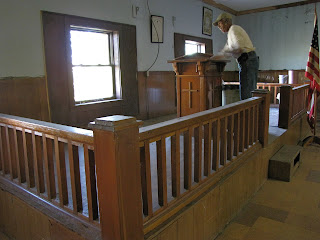 "Ike and Tina Turner performed in here," remembers Van, Jr. "So did the Bar-Keys in the 60's, the Temptations and the O-Jays. One of the biggest crowds I remember in here was for Sly and the Family Stone. During the soul heydays, many groups that made it big, passed through here playing to young black people. I remember the older Masons never understood the popularity of the soul groups, never even pretended to. But they did understand that our people did not have a chance to get out in Kingsport much, it was so segregated and all, and rather than have the young people risk driving off on the highways to Knoxville, Nashville or Atlanta and seeing the groups, the Masons brought them to Riverview." 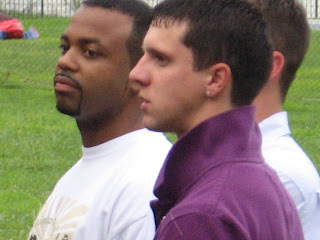 It might be difficult to imagine the young African-American men of today, trying to live up to the standards of yesterday's Masons.

"The role models, the values and things change with time," says Van, Jr. "This type of lodge, this type of Mason required a lot of time, a lot of concentration. Back then, they had the time to live the values, but nowadays, nobody has the time. You're doing what you can to survive on your own these days, but back then, the community had the Masons, and the Masons had each other. Family life was different back then...men were expected to stand by their wives, and most families had father figures. The Masons were the backbone of the family system."

That family system also spread to many of the women in the community, married to Masons. 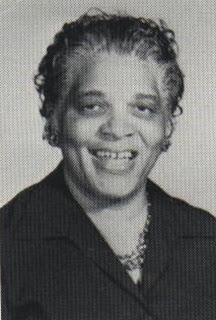 "If Daddy (V.O. Dobbins Sr.) seemed to be overboard with the Masonic philosophy," Van Jr. says, "Mama (Mrs. Fannie Mae Dobbins) was ridiculous. She'd be 65, 70 years old and going out every day carrying food to folks that were shut in, with nobody to do for them. She'd fix food and take it to folks like Miss Mamie Dixon, and she'd always put candy in her pocket. When she would be walking with the food, the kids would always run up to her, because they knew what she had in her pocket. It was hard for them kids to get jawbreakers and tootsie rolls and stuff like that, but she never forgot to have it in her pockets for them. Almost like a Mason who remembered to take care of the community first, then self.

"There are still Masons around the country, living the Masonic life," he says, "and they are to be commended for that in today's society."

"The Riverview Masons represented men who all had different skills, abilities, education levels, with which they could address the various issues that faced the African-American community during a turbulent time. Money was scarce, but the Masons found ways of helping people survive. They were strong because of the unity to be able to provide services and different things for the Black community that were not available anywhere else."

"The Masons in Riverview stood out, not for who they were...but what they believed in, and how they demonstrated it."
Posted by douglassriverview at 1:02 AM