Snow in Riverview: "Oh, the Weather Outside is Frightful"

Frightful weather indeed, as 6 to 8 inches of snow blankets Riverview, South Central, and the Kingsport area from New Canton to Bristol on Friday and Saturday, December 18 and 19, 2009.

Northeast of Bristol, the snowfall was much heavier, but it certainly left its mark on the Riverview neighborhood.

To see a slideshow of the Snow in Riverview, click here. 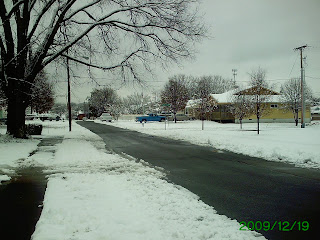 "Friday afternoon, it was raining," says Jeannie Hodges, "and we'd just got word that the schools would be closing early. The rain was coming down when I picked up my grandson at 12:15. It switched over to snow quickly in the early afternoon, and I noticed that it started sticking. I was really surprised at that."

By the time it was over, Riverview, Kingsport and Sullivan County measured 6 to 8 inches of snow on the ground... 4 to 6 inches had fallen across Johnson City and Washington County, Tennessee... 8 to 10 inches across Rogersville to New Canton in Hawkins County... 7 to 13 inches in Gate City and Scott County... 10 to 15 inches across Big Stone Gap, Norton and Wise County, Virginia. 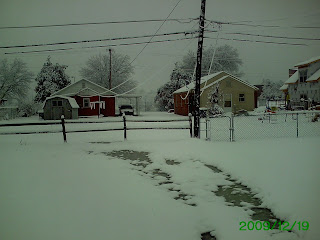 "I measured 6 and a half inches in the yard," says Mrs. Hodges. "We went down Louis Street and Lincoln (MLK Drive). We were wondering about the snow plows. I didn't hear one, but down the middle of Louis and MLK were clear. Today, when you got out of Riverview, the main roads, Center Street, Sullivan Street, Eastman Road, Wilcox Boulevard, Stone Drive.. all those roads were clear."

"Yesterday," she says, "was a different story."

HERE'S AN EXAMPLE OF WHAT JEANNIE SAW, FROM ANOTHER KINGSPORT RESIDENT ON THE OTHER END OF TOWN 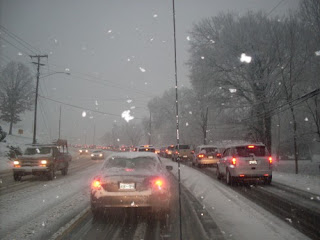 SCREEN NAME 'GINNY': "This picture was taken earlier today (Friday) at about 5:15pm on Fort Henry Drive in Kingsport. We were driving from the mall to Post Oak drive nearly at the other end of Ft Henry (almost at Gray). We were stuck in traffic from 4:00pm to 8:00 PM. Highway 36 is still stalled heading into Kingsport due to the snow and a couple of accidents."

The above picture is typical of roads in Kingsport on Friday afternoon.

"We had to go from the Fort Robinson area, just west of Lynn Garden Drive, to just west of Allandale there on the other side of Rotherwood," Mrs. Hodges says. "It took us 2 hours. With all the snow, and traffic moving slowly, and the wrecks. People were sliding all over the place, and some of them would hit roadblocks, turn around, and drive in the wrong direction on the four-lane Stone Drive, just to keep moving. Some people couldn't get into their subdivisions, especially at Rotherwood Hills and Rotherwood Estates. They couldn't make it up the incline to get into the subdivisions, so they ended up parking along Netherland Inn Road, and that led to the congestion and slow-going."

"I called Wal-Mart to check on getting some times, and they told me they were selling tires right and left. People buying them up because of the snow."

"We were lucky in Riverview," Jeannie says. "The lights flickered just for a bit, but stayed on, but other people are not so lucky." 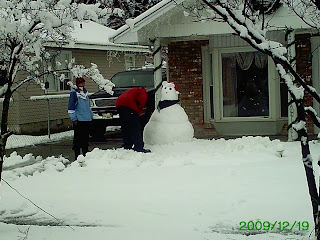 The bad weather immediately mobilized many people like Johnnie Mae Swagerty, who routinely swing into action checking on the sick and shut-in in times of bad weather.

"I checked on the Snapps, James and Ellis," she says, "and they were doing O-K. I went down and check on my mother (Pastor Geraldine Swagerty), she had just got out of the hospital with cancer, and Miss Eleanora Horton, and they were both doing all right. I checked on the Pruitt's, Shelia Leeper and her mama, Miss Eula Cartwright, and I made calls to some other folks to see if they needed anything. I checked on Mr. Mark Orlinger on Oakdale Drive, and took him some bread and stuff. Many people just couldn't get out, and really shouldn't because it was so slick outside."

The Saturday edition of the Kingsport Times News was not delivered because of widespread power outtages, leaving a lot of local residents "in the dark" about how the rest of the city was handling the emergency. 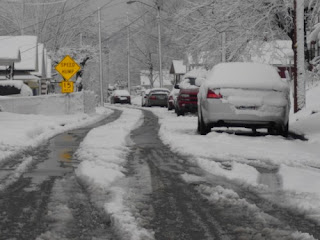 "My power went out here Friday night around 10 o'clock," says Sandra Wilmer in New Canton. "It didn't come back on until about 2 o'clock, and it got pretty chilly. We had around 6 or 7 inches of snow in New Canton and Church Hill, and I haven't tried to go anywhere. I've got things to bake for Christmas, and I'm afraid to start baking 'cause the power might go back out," she chuckled.

"There was a power outtage at Holly Hills down there in Rotherwood," says Mrs. Swagerty. "There's no heat, no electricity, no nothing. My son is on his way here, it's taking him about 2 hours to get here, but he was on Stone Drive trying to get here so he and his wife and son could have heat. Tish's husband went to try and get my other sister and her family down to my house, because they don't have any power either."

"I've been calling around checking on people, to see if they needed anything. Many families are spending an early Christmas together before the holiday next weekend, because the electricity is out where they are. We've been trying to get with everybody without heat, and get them moved down to places with heat and electricity."

"Dale Street, Maple Street and East Sevier were pretty covered, but people were driving slow and getting around, but our seniors don't need to be getting out in all of this mess."

"We have to watch out for one another."
Posted by douglassriverview at 5:22 PM