Water Woes in Part of Riverview 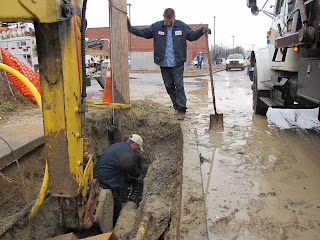 Our cameras found workers from Kingsport Public Works hard at work, repairing a broken water main on Wheatley Street, at the former intersection with James Street in Riverview on Thursday, December 31st.

The broken water line brought out the workers on New Year's Eve morning.. they say the break is a routine one, that the 6-inch water line right here at this part of Wheatley Street is rather old (I told them they should check the water lines on Dunbar and Carver Streets, if they wanted to see OLD water lines). 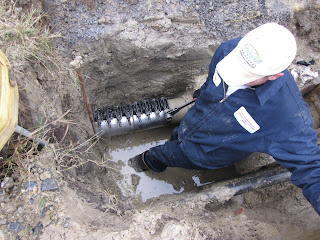 Public Works employee Joey is in the hole, and he was able to cut the busted water line out, replace it with new pipe, and then clamp it down. The process took about 20 minutes.

Riverview residents on Wheatley Street, from Industry Drive back to Dunbar Street and then down to the old James Street at the new non-profit tower, were all without water for about an hour on Thursday, while the break was repaired. The break did not affect the nearby non-profit tower under construction, nor the renovations going on at V.O. Dobbins, even though it was practically beside the building. 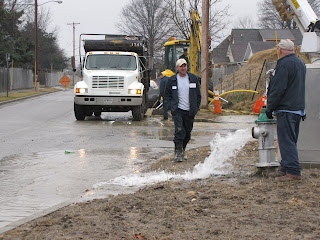 PUBLIC WORKERS EMPLOYEES FLUSHING OUT THE NEAREST HYDRANT TO THE WATER MAIN REPAIR--LOOKING DOWN WHEATLEY TOWARDS DUNBAR AND INDUSTRY DRIVE
Posted by douglassriverview at 10:56 PM