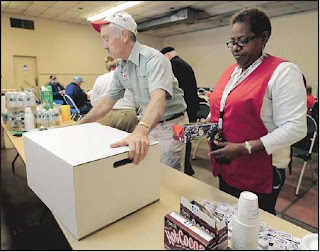 Red Cross volunteers Joel Van Ryn and Virginia Hankins prepare lunch Monday for the area residents who remained in the shelter at the Kingsport Civic Auditorium. About 14 people were still at the shelter early Monday, waiting for power to be restored to their homes.

POWER STILL OUT IN THE TWO BLOCKS OF RIVERVIEW

AEP Appalachian Power expects power to be restored to the vast majority of its customers by this evening. Worst-case scenario though, some people in this region may still not have power restored until midnight on Christmas.
Last week’s snowstorm knocked out the power to more than 200,000 households in AEP’s service area in Tennessee, Virginia and West Virginia — 20,000 alone in the greater Kingsport area. Over the course of the weekend, more than 1,000 workers took to the streets to repair damaged and destroyed power lines and poles.
By Monday morning, AEP reported 6,800 homes without power in Sullivan County, 1,380 in Hawkins County and 130 in Washington County, Tenn. Isaac Webb, district manager for AEP, said that number should be below 1,000 by Tuesday evening.
“This may linger another day or two on the Tennessee side,” Webb said, noting it could be Christmas before AEP restores power to every home. “It’s difficult to predict because you have to put eyes on every single thing. While we’ve looked at an awful lot of it, there are still surprises waiting on us.”
AEP was reporting 6,400 customers in Scott County without power (including the Duffield Industrial Park), 1,800 in Washington County, Va., 4,000 in Russell County, 10,000 in Buchanan County, 8,400 in Dickenson County and 3,200 in Wise County.
“While we have significant enough trouble on the distribution system, we’ve lost multiple transmission lines in that area so substations do not have electricity to them,” Webb said Monday. “We are fixing those lines today and finishing up identifying the trouble, so you should see that number go down dramatically on (Monday) and Tuesday.”
Webb said probably more than 1,000 people are working in Northeast Tennessee and Southwest Virginia to restore power. In Kingsport and Scott County, AEP has 144 overhead line contractors from out of state and 120 AEP employees working, along with another four or five dozen tree service crews.
On the Virginia side, Webb said AEP has around 400 outside people working with 200 AEP employees and seven to eight tree service crews. The contractors have come from Arkansas, South Carolina, Georgia, Tennessee, Virginia and North Carolina.
“We’re finding that everywhere we go, there is something that has to be fixed — whether it’s a wire down, a pole broken or a tree on the line or whatever,” Webb said. “So the going is a bit slower than we would like because it’s not simply throwing a breaker and restoring power. But we’re working very hard to get neighborhoods restored as quickly as possible.”
Webb said AEP spends over half of its maintenance budget each year on trimming trees, but for the most part, trees with power lines running through the limbs have not been the major problem.
“It’s the trees next to them,” Webb said. “In most cases it’s not trees next to the lines; it’s the trees 20, 30 or 40 feet away from the lines that get overburdened and fall over on the lines.
“When they hit the line, they’re breaking poles, snapping cross arms and knocking wires down. It’s not a simple matter once you get out there to fix the problem.”
When AEP loses power to large sections of its service area, the company establishes a priority system on restoring power — critical pieces of infrastructure come first (hospitals, water pumps, emergency services), then the company looks at where the biggest outages are and tries to restore power there next.
Crews are working 16-hour days to restore power, with Webb noting fatigue is an issue, especially since some of the workers were involved in repairing the damage from the recent windstorm.
“You could have people out there all night long, but you wouldn’t get anything done. It’s cold, and you can’t see what you’re doing. You’ve got to have people who are thinking well,” Webb said.
AEP says customers who are experiencing an outage should make sure Appalachian Power has been contacted by calling or reporting it online.
The phone number to call in Tennessee is 1-800-967-4237, and in Virginia the number is 1-800-956-4237.
To report an outage online go to www.applachianpower.com.
Kingsport established an emergency shelter for those without power over the weekend at the Civic Auditorium. On Monday morning, about 14 people were taking refuge in the facility. By the afternoon, about four or five remained. The Red Cross reported about 35 people used the shelter over the weekend.
The Mount Carmel Fire Station was also an emergency shelter over the weekend, holding up to around 30 people at one point and seeing about 60 people total, according to Fire Chief Chris Jones. By Monday afternoon, the number had dropped to about three or four people.
Posted by douglassriverview at 11:20 AM