THIS STORY AND PHOTOS COURTESY THE KINGSPORT TIMES NEWS 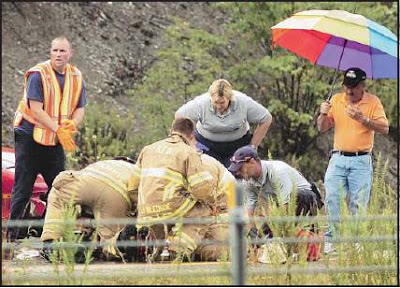 A 7-year-old girl was killed Thursday after being ejected from a car during a crash on Interstate 26 in Kingsport.

Police report she was not restrained in the vehicle, while two adults and a toddler were transported to the hospital with injuries.

According to Kingsport police, the wreck occurred at 7:25 p.m. at mile marker 2.8 of I-26. An eastbound 1996 Pontiac Sunfire, traveling through light rain and on wet pavement, reportedly lost control and entered the grass median.

Police say the Pontiac rotated and struck a cable barrier then a concrete ditch line, ejecting the 7-year-old backseat passenger through the rear window. The girl received fatal injuries.

The driver of the car is identified as Ronisha Shaneen Dully, 22, of 3412 Statford St.. Kingsport, and the adult passenger as Keyonna Dulaney, 26, of 44 Milam St. Kingsport. They, along with the 22-month-old boy who was in a child seat, were transported to the hospital with non-life threatening injuries.

An investigation by the Kingsport Police Traffic Unit is continuing.
Posted by douglassriverview at 7:57 PM