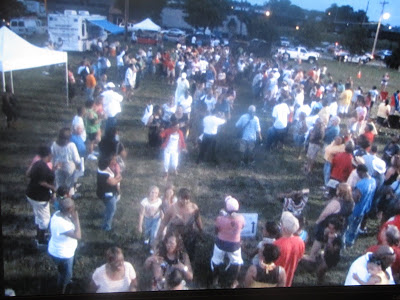 It’s not easy to get a record in Guinness World Records. If it were, the book would be as thick as the old Sears catalog. It almost is anyway.

But that didn’t stop the crowd at Rhythm in Riverview earlier this week from trying to earn a spot for World’s Longest Soul Train Line Dance.

“Soul Train” was a popular Saturday music show, and the Soul Train Line Dance — a signature dance performed at the beginning of each show — was similar to the Stroll, a popular 1950s teen dance: boys on one side, girls on the other, boy crosses over, takes girl’s hand, and they sashay down the line and drop back in at the other end.

The record was to be set during a performance by Kingsport native Vic Danger. Vic’s wife, Gretta, contacted the Guinness folks, who told her this would be a new category. Since it was the first attempt to set the record, the Guinness folks set a minimum of 200 dancers.

“If we reached that, everybody after us would have to top whatever we started with,” said Calvin Sneed, another of the organizers of the record attempt.

And there was the rub. After the group got their line going Monday night, the designated spotters started counting. “One spotter counted 205 people. From the tape I shot from the bucket truck, I counted 208 people. When I counted again, I got 209. The third time, I got 208 again.”

It’s going to be close.

“Two-hundred people is a whole lot,” said Calvin, “more people than you think when you sit down and count individual heads. And when everybody’s shaking their collective groove things, little kids are running loose breaking into the line like it’s the end of the school year, and everybody listening to just the music and not the line organizers, it’s difficult to keep people focused.”

Calvin said his experience Monday night makes him wonder how they did it on the original “Soul Train.”

“Surely, with all the flying legs, feet getting stepped on, and everybody wanting to be the best dancer, how in the world did the show coordinators keep them on point?”

Now it’s a waiting game, waiting to coordinate the count from their separate video cameras. And that requires physically matching up individual dancers, no matter what their age, by what they were wearing, in all three video clips. And then submitting the paperwork to Guinness.

“It’s like waiting in the dark on Christmas morning for your parents to get up, so you can tear into the presents under the tree. I feel good about our chances, but again, it is going to be way close — too close for comfort.”

Cross your fingers, everyone.