Below, Sherry Harris hugs the Rev. Geraldine Swagerty after eating at the Kitchen of Hope on Thursday afternoon. Swagerty founded the kitchen and has been operating it in the basement of Full Gospel Mission Church on Sevier Avenue since 1999. 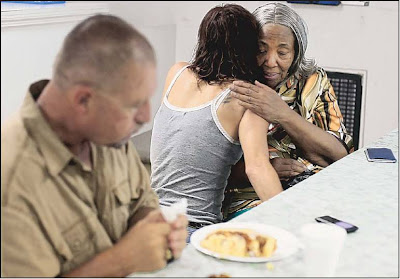 KINGSPORT — A soup kitchen that has helped feed the needy in downtown Kingsport for more than a decade is in danger of being shut down due to insurance company code requirements.

Kitchen of Hope founder and operator Geraldine Swagerty said Thursday that an insurance company providing a policy for the group is requiring the facility’s kitchen to be outfitted with a new venting hood exhaust system in cooking areas or face a recommended shutdown.


Jerry Ford and Jim Belgeri of Cassidy United Methodist Church stir food on the stove at the Kitchen of Hope on Thursday. 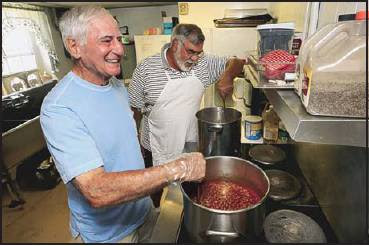 “This might be a mountain I can’t face,” said Swagerty, who founded the kitchen in the basement of her Full Gospel Mission Church on Sevier Avenue in 1999.

“We’ve barely been surviving, and I’ve been hummin’ and bummin’ for that,” Swagerty said. “We’ve probably got $700 in the treasury right now, and the estimates that I have gotten for the vents and the system have been at least $6,000, and that’s the cheapest.”


Single mother Sherry Harris and her son Tyler, 8, eat at the Kitchen of Hope on Thursday, center. They eat at the kitchen every day and have been since 2005. 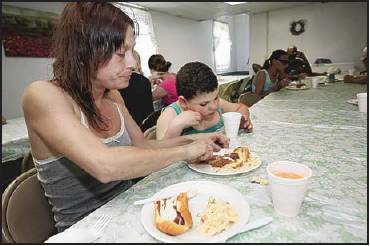 Swagerty’s outreach program to feed those less fortunate has been driven by the donations of supporters and other Kingsport churches over the years.

Even local businesses have donated their time and services to Swagerty, at reduced or no cost, just as a way to say “thank you” to a service that serves thousands, especially in the winter months.

“People make it on less, but we help them get a meal when things are a little bit lean. No doubt we would not be here unless we had people who do plumbing, construction work or just want to dish out meals and want to help us out,” Swagerty said. 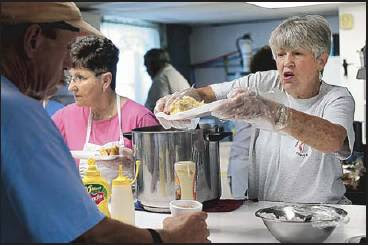 Providing a facility that helps anyone who comes in off the street has put Swagerty’s dedication to the verse “turn the other cheek” to the test.

“Salt shakers, toilet paper, they will take anything sometimes. You don’t know if that is a legitimate need or just meanness, but we have survived worse,” she said.

Swagerty continues to be hampered by health problems that have taken her out of the kitchen full time, and along with medical bills and paying off loans for improvements made to bring the kitchen up to code years ago, another personal financial investment is not feasible.

“Just too much piling up right now. I just cannot take on any more debt right now, but I don’t want to see this kitchen go away. We just hope that folks can help us out again,” she said.

Donations to help the facility can be sent to: Kitchen of Hope, c/o Full Gospel Mission Church; 740 E. Sevier Ave.; Kingsport, Tenn. 37660.
Posted by douglassriverview at 10:38 AM