Vic Danger Back Home For Concert

Victor Simon says he was a bit of a daredevil growing up in Kingsport. 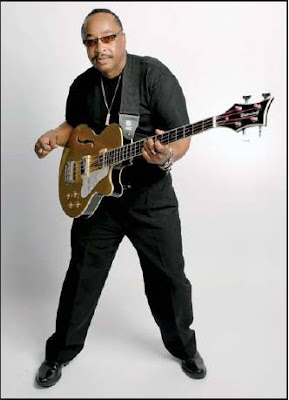 “When I was younger, my brothers and I would do everything from bicycle stunts to motorcycle stunts. I crashed so much they started calling me Vic Danger,” Simon said during a recent phone interview from his Nashville home. “Somehow, I didn’t get many broken bones. But I did get a lot of bumps and bruises. That’s what was so funny about it. I always kept getting up and they’d tell me, ‘Wow! That was cool. Can you do it again?’ I’ve crashed lawn mowers, motorcycles, bicycles, you name it. I should’ve had my own ‘Jack Ass’ program.”

It was while a junior high school student at John Sevier that this thrill-seeker found his niche in music. “I was in John Sevier’s band and just moved to the next level in high school,” Simon said.

Simon is a 1971 graduate of Dobyns-Bennett High School and says in the late 1960s and early 1970s, racial discrimination was still quite prevalent, even in Kingsport.

“I had all kinds of friends, both white and black, but in the general area of living, it was still pretty tough. There was just not really any potential, that I could see, for work or really doing anything that would help me in my adult life. I loved to play music, and I had this gift from God. I thought if I got good enough at it that I could create my own path. You just have to look inside yourself and decide you’re not going to stay down all the time. You’re going to try to do something to better yourself. The Lord built this fire in me and without God, I would not be where I am. He made all of this possible, and I am ever so thankful,” Simon said.

Simon, who uses his childhood nickname –– Vic Danger –– on stage, will make a stop in his hometown tonight for Fun Fest’s Rhythm in Riverview concert.

Vic Danger and the Voo Doo Doctors will perform at 7 p.m. at the V.O. Dobbins Ball Field, Louis Street. Admission is free.

Simon says the audience can expect to hear a little bit of everything at tonight’s concert — The Temptations, Roger Zapp, Huey Lewis and the News, Cee Lo Green, James Brown and all of today’s latest R&B hits.

“We play for the people. We want them to have a great time. We try to play something for everyone,” he said.

But besides the great music, one of the other highlights of the evening will be the Soul Train dance line, Simon adds.

“We’re going to try to have the longest Soul Train dance line. If we can get the longest one, we can go straight to the ‘Guinness Book of World Records.’ We need a camera, and we’ve got to make it as public as we can. But I think we can do it. I want everybody to come on out and help us set the record,” he said.

Simon, whose music career has now spanned more than 30 years, plays 4-, 5-, 6-, 7-, 8- and 12-string basses as well as upright and acoustic. He has performed with many artists and musicians from throughout the world, including Larry Coryell, Bernard Purdee and The Motown Sounds and has opened for numerous well-known artists, including Olivia Newton John, Iggy Pop, The Beach Boys, and KC and the Sunshine Band .

Simon plays an eclectic style of music, ranging from pop, R&B, country and rock to rave, gospel and funk.

Vic Danger and the Voo Doo Doctors host the R&B/Blues Jam in Nashville and perform at the Boardwalk Cafe on Tuesday nights.

Simon also tours extensively with The Tyrone Smith Revue –– one of the most in-demand dance and show bands in the south. With The Tyrone Smith Revue, Simon has had the opportunity to play at events for some of the most-recognized celebrities in the country. He even played at the inauguration of former President George W. Bush, and at the wedding reception of President Bush’s daughter, Jenna, three years ago.

Simon is also the founder and chairman for the National Alliance Musicians Network, an organization that has started several bands and helped musicians find work. He has also given music lessons at Nashville’s Music School on Music Row as well as private lessons for various artists.

Simon says he wants to be an inspiration to his younger fans.
“I have worked hard and diligently at keeping myself together and have tried to remain well-respected and do things the right way and keep myself out of trouble. I want to show these younger kids that if I can do it, the world is certainly open for them,” he said.

Opening a creative arts center right here in Kingsport is just one way that Simon says he would like to give back to his hometown.

“I can’t do it by myself. But if I had some help and people who would be willing to back me up, I’d love to do this for the young people of Kingsport. We’ve got too many young, creative minds that are just being wasted. They don’t know what to do with themselves. I’d love to offer them opportunities to learn about music, theater, the arts, dancing. I’d love to bring in directors who could talk to them about how movies are made. I’ve met a lot of really generous people through the years who wouldn’t mind coming in to lend their talents, especially to a young mind,” he said.

And although Simon says he is super excited to be coming back to Kingsport to play in Riverview for all of his friends and family tonight, this musician who’s played for presidents and countless celebrities, does admit there’s one item on his bucket list yet to be checked off.

“I’d love to be given the opportunity to play in the stadium (J. Fred Johnson) during Fun Fest. I’d be happy to just be the opening act for someone,” he said.

For more information on Rhythm in Riverview, visit www.visitkingsport.com/funfest/.

For more information on Simon, visit www.vicdanger.com
Posted by douglassriverview at 12:26 PM