2012 Rhythm In Riverview: A "Free Flow" to Great Entertainment! 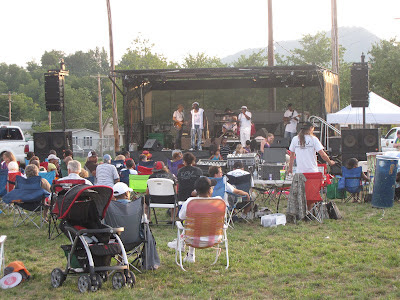 "Shake yo' groove thing" with a local musical group, whose mission "is to get everybody up on the dance floor."

Visitors to the annual Rhythm In Riverview concert did not disappoint, as soul music lifted into the air from the show band Free Flow. 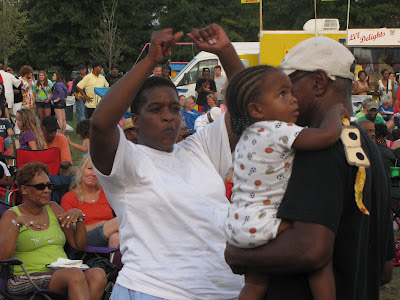 Click here to see pictures from the 2012 Rhythm In Riverview Fun Fest Concert.

"I walked around a couple of times, and it seemed like everybody was enjoying themselves, especially there towards the end," Mrs. Hodges says. I saw some dances I'd never seen before from the crowd."

"I remember thinking, 'well, what is that?'" she laughed. "I've never seen that before. But that meant that everybody was having a good time." 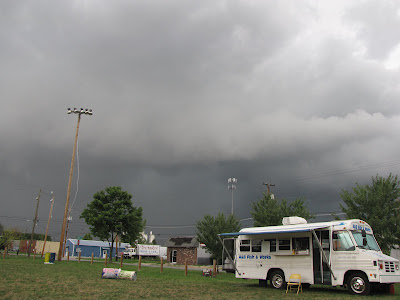 People started setting up their lawn chairs in front of the stage around 5 PM, and Rhythm In Riverview started around 6:30. Earlier in the day around 1 PM, the clouds darkened, the temperature dropped, and a thunderstorm system moved into Kingsport around 1:30 with torrential rains that soaked the ballfield and backed up the storm drains on nearby MLK Drive. The rain was short-lived, though.. once it ended around 3, things started warming back up and drying out fast. 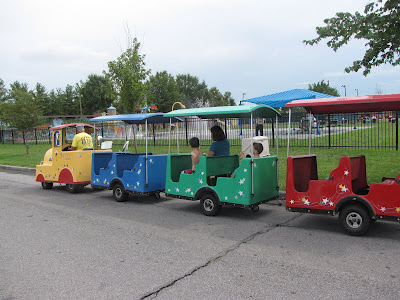 "The rain didn't change any of our plans," says Mrs. Hodges. "The only difference was a minor one for one vendor, the motorized train that carries the kids around. The operator decided to run it on the blocked portion of MLK in the street, because he was worried that the ground may have been too soft from the rain. It was amazing that, as much rain, as we got, the field was not soggy or muddy. People were still able to set up their chairs and sit in the field just fine. Some people may not have come down because they thought the field was muddy, but they missed out on a good show, the music and the food, because everything was just fine." 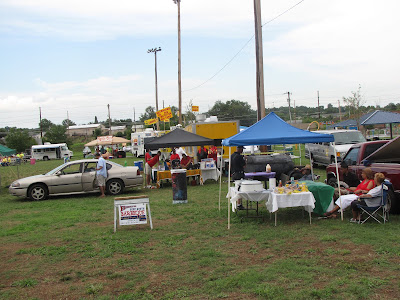 "This year, we had 10 to 12 vendors," Mrs. Hodges says. "In fact, there were three new ones, that took the place of some from last year that didn't come back."

Competition is the last thing you think of during a gathering like Rhythm In Riverview, but it turns out that there was some sparring among a couple of the vendors. 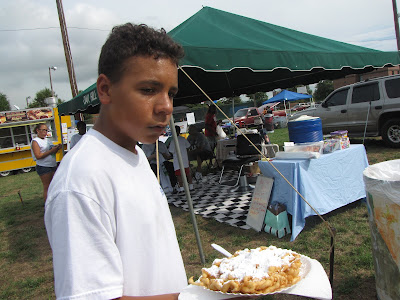 "It was where one vendor was selling one of the same popular food items as another vendor," she says. "The second vendor was undercutting the first vendor by selling the exact same food item 2 dollars cheaper. Well, that stuff happens everywhere all the time. The first vendor got mad, came over to me, and asked me to ask the second vendor to leave. I said, 'well, I can't do that.. he's paid his fee, he passed the city food vendor inspection just like everybody else, and I couldn't very well asked him to leave. I don't even know if it would have been legal to ask the other man to leave, and I decided to just not get involved. Then, he asked me if I wanted HIM to leave, and I said 'no, I don't WANT you to leave, but it's your decision.' Funny thing is, they were both here last year."

"He didn't leave," she said. "He didn't go anywhere.. he stayed right there. Opened up his place and everything. I hear they both go to the same events, and I think it is just a feud they got going. Not everything they had was the same, but it was just that one food item that was the same, causing the problem between them. The first man calmed down eventually, and I didn't hear one more word from him during or after the show." 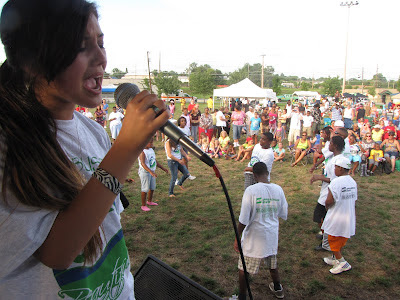 The crowd probably wouldn't have cared less about a "food feud." They were too busy getting into the spirit that makes up Rhythm In Riverview. First on the agenda was a musical performance by the New Vision Youth, who wowed the crowd with several dance routines. Kingsport Idol finalist Juliana Soto led the way in firing up the crowd with her vocals, and the New Vision Kids just fell right into step.

The crowd loved it. They also loved the music of Free Flow. 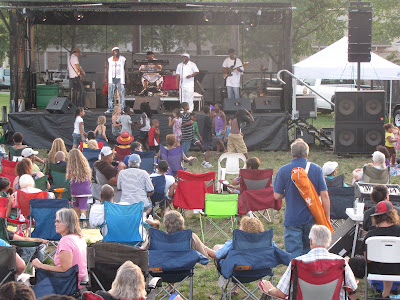 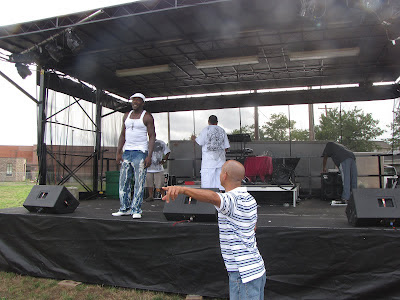 James "Trippy" Deal was instrumental in getting the band to play Rhythm In Riverview. He and his father Jimmy Deal routinely travel around to various clubs in nearby cities, to scout out local, upcoming bands to see which ones have promise.

"I think Free Flow did an excellent job in the way they interacted with the crowd," Trippy said, "and the crowd responded right back positively, and that's important. The key to their success is that they are just nice, down-home people. They treated the people of Kingsport like they grew up here, like they live here. Asheville is not that far away, and they know this area well. The good thing was, they played music that people have heard before, but they put their little spin on it, and that got the crowd involved." 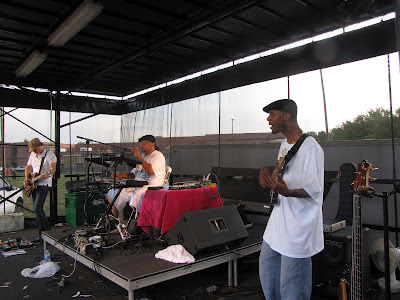 "That's how they work," he says. "They put that funk on everything they play, Calvin. They've got a driving bass line on everything they play, and they did just great. Everybody welcomed them.. didn't treat them like 'well you're from Asheville and we don't care.' Everybody was friendly and loved their music and because of that, they love Kingsport." 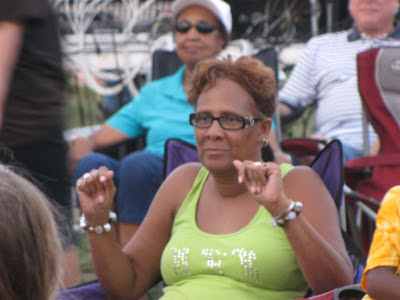 It helps that Free Flow loves to play Kingsport.

"They love it here," says Trippy. "There were five songs they didn't get around to at Rhythm In Riverview. They didn't get to do 'Jamaican Funk,' they didn't do 'Poison,' they didn't get to do 777-9311' and 2 other songs. Thing is, they played for 2 hours straight on the ballfield without a break. That's pretty much unheard of, but the crowd just didn't want them to leave. These guys are not pre-madonnas, they're just down-to-earth, everyday people who play to the audience."

"When they first start out, it's a get-aquainted session," he says. "They kinda lull you into the beat, get you going. By the time they go into their second set, that's the set that makes people want to get up and dance. You just don't want to sit still." 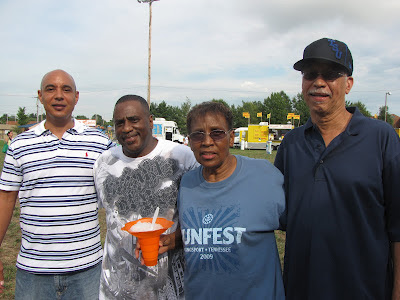 "This band was a good fit for Rhythm In Riverview," says Mrs. Hodges. "Price is always a big thing to the sponsors, and some folks cost more than we can afford. Free Flow was very reasonable, and Roger Ware was a really nice person to work with. You want folks to enjoy themselves, and the band delivered their money's worth."

Meanwhile, Trippy Deal and his dad Jimmy, are always on the lookout for local talent, that's available to come to town to play for the home folks.

"My dad says, anybody can just play C-D's at events," Trippy says, "but it takes a really solid band to play live and keep you in the beat for a show. We check out Misty Blues in Johnson City a lot. Misty is the key lady in getting bandes in, at least two bands a month. That's when we get to them and ask 'can you come to Kingsport and do an event for us?" 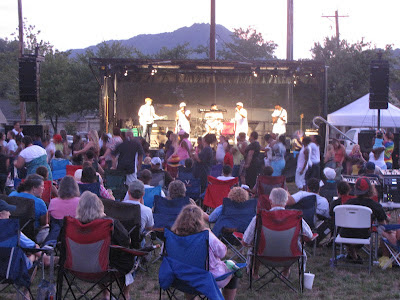 Mrs. Hodges says, the connection paid off for the audience that came out to see Free Flow.

"You want folks to enjoy themselves, have good food, socialize with each other and the band."

"That's what Rhythm In Riverview has always been about."
Posted by douglassriverview at 1:01 PM