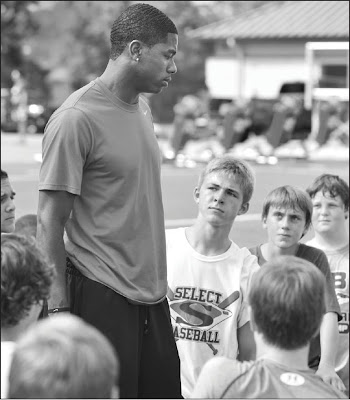 Indians’ head coach Graham Clark began the day with an overview of the camp and what is expected of the kids. He led the camp attendees through drills and techniques along with his coaching staff and several former players. The three-day camp allows kids the opportunity to participate in activities that will prepare them for future football endeavors.

“Number one, we teach them some fundamentals and they get a chance to experience the football atmosphere we have here,” Clark said. “We’ve been blessed to have some guys come through the program that went on to do some good things.”

While football is the main focus, Clark makes it imperative that the kids come out of the camp with the right mindset.

“We want them to have a good time playing but we also teach character and we want to make sure they understand that the classroom comes first,” Clark said.
Each player and coach makes it their mission to articulate something different to the kids. That way the kids get to hear several different perspectives that they can use in every day life.

“I’m big on work ethic and making sure the kids give all they can,” Daniel Preston said. “You never think you’re going to be in this position until you are. I’m very thankful to have played for this coaching staff and I love being able to give back to this school that’s already gave so much to me.”

Preston graduated from D-B in 2008 and recently finished his senior season playing football for the Emory & Henry Wasps. After his 2011 season with the Wasps, Preston was named to the All-Old Dominion Athletic Conference team.

The most recent success story from Dobyns-Bennett, Coty Sensabaugh, was also instructing at the camp. Sensabaugh was the Tennessee Titans’ fourth round selection in the 2012 NFL Draft out of Clemson University. His cousin, Gerald, also a D-B graduate, currently plays for the Dallas Cowboys.

“I enjoy giving back but hopefully what I can give these kids today, more than anthing else, is the hope and belief that they can be whatever they want to be,” Sensabaugh said.

Sensabaugh spent five years at Clemson after getting redshirted his freshman year. He rose through the ranks and during his senior season he started 14 games, gaining attention from the NFL. His success is credited to the competitiveness of his family.

When Coty was 11, he lost his older brother, Jamaar, to leukemia. Losing a family member is never easy, but Coty’s love for his brother will never diminish. He looks forward to starting his NFL career but will never lose sight of what got him there.

“My goal growing up was always trying to be better than my brothers and cousins and that’s what drove me to get better,” Sensabaugh said. “Just getting drafted is a blessing but going to the Titans was icing on the cake.”

Dobyns Bennett’s camp for seventh through ninth graders wraps up on Wednesday when another camp starts for third through sixth graders.

Posted by douglassriverview at 10:43 AM