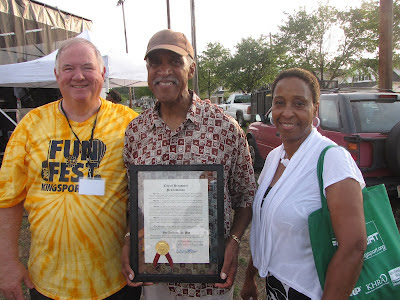 If you see Van Dobbins, Jr. today or in the next few days, be sure and tell him congratulations! 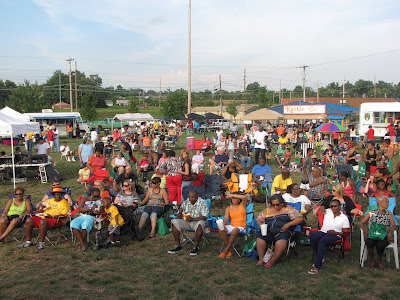 The proclamation was made Monday night, July 16th, in front of hundreds of people at the annual Rhythm In Riverview concert on the Douglass Ballfield, the first big concert of Fun Fest 2012.

"You know, I've been Mayor of Kingsport for 7 years," Mayor Phillips says, "and Van Dobbins is one of those people that makes an impression every time you see him. I have never asked him to do something for the city or community that he hasn't cheerfully done. He's the kind of person you just appreciate knowing. He's done so much for this city and community." 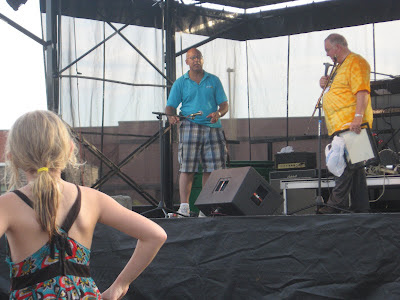 The method to make sure Van attended the Rhythm In Riverview event to receive the award was one that involved stealth, secrecy and in-depth planning. It involved the mayor's office, Van's wife Dorothy, Jeannie Hodges with the South Central Kingsport Community Development Corporation (a Rhythm In Riverview co-sponsor), Terry Cunningham at the Kingsport Housing and Redevelopment Authority, Johnnie Mae Swagerty with New Vision Youth (one of the performers), and Calvin Sneed with the Sons and Daughters of Douglass Alumni website.

"We told him that we were giving YOU, Calvin, an award and we wanted him to saw a few words," says Mayor Phillips. "Dorothy said he worried to death about what to say, and had actually written down some things he wanted to say. He had his notes with him about what he was gonna say about Calvin, and was standing there reading them." "When I started reading the proclamation and said 'Van Dobbins, Jr.,' I'm not sure he knew what to do. His face flushed and he knew he was caught," Mayor Phillips said. "I just felt that people like Van just give, give, give and they deserve to be recognized. TDhis is one of the happiest things I've ever done." 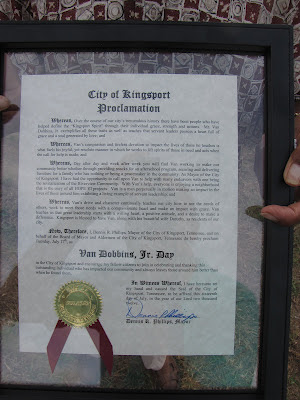 "It's what makes being a mayor worthwhile."
Posted by douglassriverview at 12:41 PM