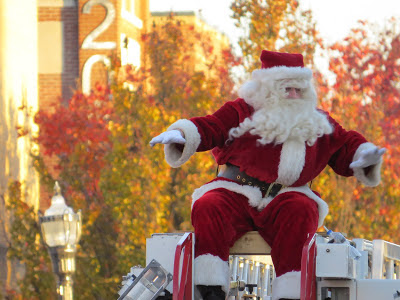 If you missed the 2012 Christmas Parade through downtown Kingsport, you missed one of the best Christmas parades in the entire region.

But not to worry. We have captured the pagentry, the majestry and the excitement of the marching bands, the floats, the traveling exhibits and of course, Jolly Ole St. Nick himself. Fresh from his trip on the world-famous "Santa Train," the jolly fat man in the red suit delighted the children and even their parents, who got nostalgic as they remembered the days when they awaited Santa's arrival on the train.

So, grab some popcorn, put on some good ole Christmas music, sit back and take a walk down Memory Lane with Kingsport's annual Christmas Parade. We captured pictures of every single float, band, exhibit, vehicle and walker in the parade (sometimes, 2 or 3 pictures---with a new camera that shoots in rapid succession, it's easy to do that, haha).

Posted by douglassriverview at 11:25 AM