"An Evening with Blake Leeper" Planned for Saturday, December 22nd 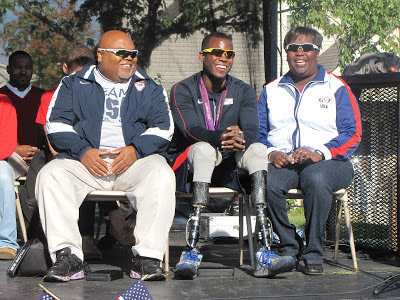 The families of Blake Leeper are planning a celebration in his honor on December 22, 2012. We are selling tickets and asking for donations to Blake’s Charity Challenged Athletes Foundation (CAF). Established in 1997, recognizes the athletic greatness inherent in all people with physical challenges and supports their athletic endeavors by providing unparalleled sports opportunities that lead to success in sports — and in life.

We would like to involve you and your company to participate in this day.

The cost of this special night $40.00 per person or if company sponsors a table of 10 will be $350.00. Make checks to Little Miss Vision Pageant, a 501©3 non-profit organization, which is tax exempt. We would like to have you and your company as a sponsor for this event which consists of a dinner at the Meadowview Convention Center. Blake will be presented the “Key to the City” and he will enlighten the audience as keynote speaker. The proceeds from ticket sales will go to Blake’s Charity. The families feel very honored to hosting this event for Blake Leeper.

To give you some background information on Blake’s accomplishments... When Blake was born without legs from the knees down because of a congenital birth defect. Doctors told his parents he would never walk, much less run. Leeper has proved those predictions wrong over and over again, walking with the help of prosthetic legs, playing baseball and basketball at Dobyns-Bennett High School. After graduating from DB in 2007, Leeper attended the University of Tennessee. After three and a half years into a five-year program there, he left for California, transferring to San Diego State University to continue his quest for a degree in applied physics. But the transfer also helped him work toward his dream of competing in the 2012 Paralympic Games in London. Although he never competed in track and field at DB, in London earlier this year he earned the silver medal in the 400-meter dash, setting a U.S. record of 50.14 seconds He took home a bronze in the 200-meter competition with a time of 22.46 seconds.

His next goal is to win a gold medal in the regular Olympics and Paralympic in Rio de Janeiro in 2016, by building a solid foundation that includes God, family, preparation and determination.

“They told my father I would never play sport,” he remembers. “They said I would be bound to a wheelchair my whole life.” “I can do all things through Christ Jesus,” Leeper says. “He has got to be one of the most impressive young men I’ve met in my life,” says Kingsport Mayor Dennis Phillips. “Blake is a prime example of what family life is all about,” Mayor Phillips.

“Get active. Seize the day,” Leeper says. Asked for advice to youth and people in general, he urged people to be active and go for their dreams because, “if you shoot for the stars and don’t make it, you land in the clouds.”

The families and friends of Blake Leeper hope to see you on December 22, 2012 6:00pm for “An Evening with Blake Leeper.”