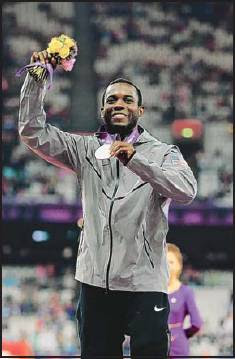 KINGSPORT — Paralympian Blake Leeper has been selected to serve as the grand marshal for the 70th annual Kingsport Christmas Parade, the Kingsport Area Chamber of Commerce announced Tuesday.

This accolade is annually bestowed upon individuals who have a substantial impact on the greater Kingsport community.

A Kingsport native, Leeper is a Dobyns-Bennett alumnus and graduated from the University of Tennessee. While at Dobyns-Bennett he played baseball and basketball. Leeper now lives in Chula Vista, California.

Leeper was born without legs below the knee. He has been using prosthetics since age 9.

He’s competed in numerous events, including Endeavor Games, the U.S. Paralympics Track & Field National Championships and the 2012 Paralympics in London, earning two medals. Leeper chose track and field as his sport of choice because he loves to run and enjoys competing in a sport that is extremely intense and competitive.

“We are so very proud of Blake and all he has accomplished, and thought that being our grand marshal would be a great way to honor him and all that he means to us in Kingsport,” said Clark.

The Kingsport Christmas Parade will take place Saturday beginning at 3:30 p.m. on Main Street and will wind its way through downtown Kingsport.

Santa Claus will once again be the highlight of the parade. Santa will board the last fire engine in the parade upon his return from the Santa Train journey. The Santa Train will arrive at the Kingsport Chamber at 3:08 p.m.

Thompson Square will perform outside Cumberland Marketing, 151 E. Main St., at 3:08 p.m. Roads will be blocked off starting around 12:30 p.m. for the parade.

The Santa Train is an annual project of CSX Transportation, Food City, Dignity U Wear and the Kingsport Chamber of Commerce.

The train delivers more than 15 tons of gifts and toys to thousands along the 110-mile route between Shelby, Ky., and Kingsport.

The Santa Train began as a way to show appreciation to residents of Southwest Virginia and Southeastern Kentucky for shopping in Kingsport.

The Kingsport Christmas Parade will be broadcast live at 3 p.m. Saturday on MY TRICITIES, WAPK and will be replayed at 1 p.m. Sunday on ABC 19-WKPT.

For more information go to www.teamsantatrain.org . For updates about the Santa Train, visit www.facebook.com/santatrain and follow @TheSanta-Train on Twitter.

Posted by douglassriverview at 8:51 AM