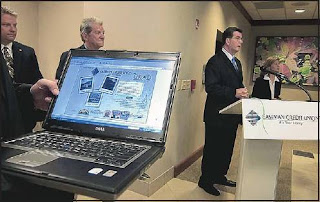 IF YOU'RE LOOKING FOR A FREE, EASY WAY TO ACCESS YOUR DOUGLASS ALUMNI WEBSITE, CHECK OUT THIS ARTICLE FROM JENNY HANKINS IN THE KINGSPORT TIMES-NEWS


Individuals with a Wi-Fi enabled laptop, PDA or cell phone can access the Internet in several areas around the city including downtown Kingsport, Riverview, and the Borden Mill and Meadowview areas..


KINGSPORT — Wireless Internet service is now available across parts of Kingsport — free of charge.
Eastman Credit Union joined forces Thursday with the Kingsport Housing & Redevelopment Authority’s Greater Kingsport Alliance for Development to announce the expansion of Wireless Fidelity — or Wi-Fi — in the city.
The new service allows individuals with a Wi-Fi enabled laptop, PDA or cell phone to access the Internet in several areas around the city, including downtown Kingsport, Riverview, and the Borden Mill and Meadowview areas.
In a news conference at ECU, officials involved with the project used wire cutters to sever the link between a laptop computer and its wired connection.
“A portion of Kingsport is cutting the cord,” said CeeGee McCord, deputy executive director of the KHRA. “This is extremely exciting news for Kingsport.”
She said that many large cities are implementing the technology as a way to attract businesses and travelers. In 2005, the KHRA, city of Kingsport, Kingsport Office of Small Business Development and Entrepreneurship, and the Kingsport Economic Development Board launched a pilot project to offer Wi-Fi access in downtown Kingsport.
McCord said the response to the pilot project was “overwhelmingly positive.”
“It encouraged us to explore and expand the opportunities,” McCord said.
Eastman Credit Union President and CEO Olan Jones said his organization decided to invest in the effort to help bring Internet access to individuals who may not otherwise be able to afford the service. He estimated that nearly 14,000 people will gain free Internet access as a result.
“We realize the importance of the Internet and want to offer additional areas of connectivity for our members and the citizens of Kingsport,” Jones said. “In a world that relies on the Internet for communication purposes, this service will bring a viable resource for all of those living or working in the coverage area, and ultimately make Kingsport and the Tri-Cities a more competitive location for attracting new residents and businesses.”
Jones said residents, tourists and business people in the coverage areas will be able to surf the Web, send and receive e-mail, “and conduct much of the same business they are already doing with the wired connection in their home or business.”
He said local police, fire and rescue personnel will also benefit with more effective communications and methods to monitor locations within the coverage areas.
“Recent studies, particularly in New Orleans, show a decreased criminal activity where police monitoring has been enabled through wireless service,” Jones said.
The network will also create educational opportunities and enhance current educational programs in the city, Jones said. He said students will be able to conduct research and communicate with teachers and professors through the network.
And tourism will also benefit. Jones said Kingsport hosts an average of 330 conventions and tournaments each year, and free Internet service will help the city’s effort at attracting new and repeat tourism visits.
Jones would not disclose how much ECU has invested to launch the expanded Wi-Fi service. But, he said, “we’re certainly interested in partnering with others to ultimately expand the scope of this project.”
“This new service is a win-win opportunity for everyone,” he added.
Tele-Optics Inc., a Kingsportbased telecommunications infrastructure company, was chosen to design and implement the network. Tele-Optics CEO Frank Waldo said the system is configured using numerous wireless access points which are mounted on light poles throughout the coverage area.
“Each access point transmits a 600-foot wireless signal overlapping with other access points to create a large wireless cloud or mesh area,” Waldo said.
He said the area’s topography, buildings and obstacles preventing strong signal strength, and the user’s proximity to an access point can all impact connection speeds in the network.
Waldo said the service is not meant to replace the wired connection people already have in their homes or offices.
“But it’s meant to enhance and serve as an additional method of connectivity when you’re away from your wired connection,” he said.
Posted by douglassriverview at 12:35 PM