Times, They Are A-changin’ For Riverview 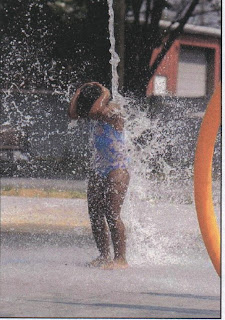 Photo by David Grace — dgrace@timesnews.net
Shakonna Carpenter gets a good soaking as she tries out the newly opened Riverview Splash Pad on Wednesday next to Jalisa Ferguson Memorial Park.

THE NEW RIVERVIEW SPLASH PAD IS NOW OPEN FOR THE SUMMER. THE SPLASH PAD REPLACES THE RIVERVIEW SWIMMING POOL, THAT ALL OF US LEARNED TO SWIM IN AND GREW UP WITH. THIS ARTICLE COURTESY THE KINGSPORT TIMES-NEWS

‘Just like everything in life, the surroundings have to change so the next generation can have the better things.’
— Van Dobbins Jr.


KINGSPORT — A gathering was held in the Riverview community Wednesday at the Jalisa Ferguson Memorial Park and the Riverview Splash Pad as community leaders celebrated a federal project, Hope VI, that will bring a new face to the aging neighborhood.
“A lot of history is going to be gone once the buildings start disappearing, but just like everything in life, the surroundings have to change so the next generation can have the better things,” said Van Dobbins Jr., whose father V.O. Dobbins Sr. is the namesake of the community center that anchors the housing community.
The Hope VI agreement between the Kingsport Housing and Redevelopment Authority and the Department of Housing and Urban Development will bring about $12 million worth of refurbishment to apartments and homes in the neighborhood.
Meanwhile, the Kingsport Department of Parks and Recreation and the youth choir group from Central Baptist Church will continue to raise funds for future enhancements around the Riverview park named in honor of Ferguson, who had just turned 4 when she was killed in an apparent drug deal crossfire in 1994 near the housing complex.
Park executive member Mark Kilgore said recent benefit concerts by the group have raised enough funds to buy new benches for the park, while Eastman Chemical Co. has pledged funding for two picnic shelters that will be constructed by Kingsport Ruritan Club members later this s u m m e r.
“We have a lot of plans for the (property) surrounding the Splash Pad and park,” Kilgore said. “We plan to have an art mural erected and painted in late summer, and we hope to add some outdoor grills in the picnic shelters. We also want to put in some sidewalks near the Splash Pad along with some sun shades to help protect the kids.”
The department is also seeking grant funding from a number of private and public sources, including filing an application through the chain of Lowe’s Home Improvement stores that assists public projects with materials.
“Everything has been positive with the new Splash Pad and the park itself. The kids have one of the neatest places in the city to play, and it’s great that the children of Central Baptist continue to want to improve the park here,” Kilgore added.
The recreational additions, which have a price tag of more than $500,000, will be the center of the new community, which could also have a proposed higher learning center as a partner to the neighborhood’s development.
Dave Light, assistant to the Kingsport city manager, said in April that the Hope VI funding could help in leveraging federal dollars for the proposed center.
“If you don’t change, you lose, and it seems like Riverview is going to come out as a big winner with everything that is being proposed. I am sad that a part of my history might be leaving, but I am real excited about what the young folks around here have to look forward to,” said Dobbins.
Any public donations toward park improvements can be made to Central Baptist Church, 301 Carver St., Kingsport, TN 37660.
Posted by douglassriverview at 12:12 PM