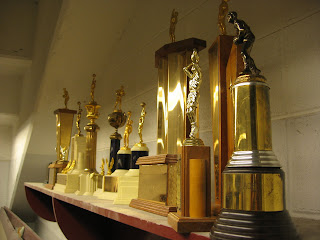 "Why are the Douglass trophies still at D-B?"

That's the question Betsy "Mookie" Aldridge has, after reading the article on the Douglass Alumni website about one of Douglass' great football quarterbacks, Bobby Joe Johnson. In the article on March 19th, Mr. Johnson said he'd sure like to see the Douglass sports trophies come back to the school someday. "We didn't just win them for the school," he said, "we actually won them for the neighborhood."

Now, almost 40 years after Douglass High School closed in Kingsport, Ms. Aldridge is worried that former Douglass athletes won't ever get to reminisce and rejoice in the competitive spirit that helped hold a neighborhood together..
"It's a shame we have to go to D-B to relive the Douglass memories," she says.

When Douglass High School closed in 1966, all the school equipment (desks, chairs, books, a top-notch auditorium sound system) were all grabbed up by any white schools in Kingsport that put a claim on them. The claiming event must have resembled a feeding frenzy, because Douglass had the best and newest of
everything, being the newest school built at the time.

The coveted trophies and awards won by many Douglass High School athletes, stored in the trophy case, were all taken to Dobyns-Bennett High School, where they were mingled in with the D-B trophies won by white athletes over the years. In a sense, Douglass lost the rest of its identity at that point, as those
trophies were the last vestige of cohesiveness the school had with its black students and the community. The empty trophy case still standing at Douglass High School is barren, save for occasional displays made by the talented children of Head Start that now frequent its halls. It is a fallen soldier, a silent testimonial to a special, magical time when Douglass trophies were reverently placed on the shelves inside by teams and supporters with pride and dignity.

Only a few of the Douglass athletic trophies have been seen over the 40 years since the school closed. Most of that time, a few of them made very short visits to display tables at various Douglass Reunions, where the athletes who won them and former students could all gaze upon them in sad remembrance of a wondrous time gone by. After the reunion event, much like the Douglass students of 1966, the trophies would be taken back to their silent home at D-B, a few to be mingled in with the D-B trophies, but most to be boxed away,never again to see the light of day or a joyous remembrance of victory.

If you have ever visited the trophy case at D-B, you'll see a few of the Douglass High School trophies, standing proudly among the many D-B trophies, their plaques proclaiming the excellence of a Number One, Number Two or Number Three school competitive ranking.
Pick a trophy and stare at it.. listen closely.. you'll hear the South Central Kingsport community in the Douglass Gym basketball stands, on the football field cheering, rallying the Douglass Tigers to victory. You'll hear our beautiful Douglass cheerleaders chanting:

We recently visited that dusty room and it was a very spiritual, almost tearful experience to dig through the various boxes and find the original Douglass trophies that provided Riverview and South Central Kingsport with so much joy and accomplishment.
Among the ones found, were many basketball trophies from the Tri-State Athletic Conference that Douglass belonged to, including the 1957 Boys Basketball Championship Trophy, a second-place trophy from 1948, a second-place trophy from 1936 (both sponsored by Knoxville College), and the first and second place Girls Basketball trophies from 1959.

Probably the most sacred memorial found, is the 1946 State High School Basketball trophy that brings back a lot of memories for so many Riverview and South Central Kingsport residents. The names of the players inscribed, conjure up memories of some great athletic movements!

Unfortunately, some of the Douglass trophies as you'll see in the photos in the Photo Gallery are damaged; many of the D-B trophies as well. The huge basketball that topped the 1946 State Basketball Championship trophy is gone, only the base with the name plaque is left; the statuettes on top of some trophies are broken off; the eagles adorning other trophies are loose. This writer observed that some of the Douglass trophies can be repaired; others can be replaced with a similar item, but without expert attention, a few may be damaged beyond repair.

"It's such a shame they were not taken better care of," a disheartened Kingsport City School Board member Wally Boyd said, when told of the conditions of some of them. "Douglass has such a fine tradition of competitiveness.. surely something can be done to remedy the condition of those that are damaged."

D-B officials say, it turns out that when Dobyns-Bennett renovated its own trophy cases some years ago, D-B students were recruited to box up all the trophies and athletic awards for temporary storage, and it is believed that the student handlers did not realize the great care that needed to be taken with the items.. hence, the damage. But even as that was going on, it's thought that some of the Dobyns-Bennett trophies were actually stolen, Mr. Boyd says. "After taking inventory of the missing ones, we think we know who might have been responsible for that," he said.

"It would not be a big problem to return the Douglass trophies to the Douglass Alumni Association," Mr. Boyd said, "for the enjoyment of the athletes and supporters who earned them." "We would also like to get the damaged ones repaired, because they were, after all, left in the care of, and were the responsibility of Dobyns-Bennett," he said.

That comes as good news to Mrs. Aldridge.
"Our local children, particularly those in the South Central Kingsport area, need to be able to see the trophies in the neighborhood school where they were earned since the school building is still here," she says, "instead of the trophies being stored in a dark room somewhere."

"It's all about passing down to the next generation," she says, "the athletic accomplishments of those who came before," she says.


SPECIAL FOOTNOTE TO THIS STORY: For your enjoyment, some of our Douglass Trophies will be on display during the upcoming Reunion (thanks to Doug Releford for that), and in the coming days, be sure and watch the News And Current Events Section for a special series of photographs reuniting those trophies with the winning teams who brought them home to Douglass High School!
Posted by douglassriverview at 10:38 AM