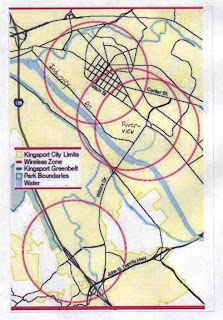 SPECIAL NOTE: As we moved towards wireless internet access in Riverview and South Central Kingsport, the provider is working to increase the signal in weaker spots. Note in the article the receive rate at the V.O. Dobbins Community Center in Riverview. Click on the map at right, and note that Riverview and South Central Kingsport in the center of the picture are within two circles, meaning they are covered by TWO wireless access points, in fact.. our area is nearly covered by THREE wireless access points right now.. Meadowview is in the center of the circle at the bottom. Folks have been asking me about this service, and again, THIS IS A FREE SERVICE. If you're considering Wi-Fi, our area is more accessible than any other place in Kingsport right now!

THIS ARTICLE FROM THE KINGSPORT TIMES-NEWS
By MATTHEW LANE mlane@timesnews.net

KINGSPORT — The download rate on Kingsport’s free wireless Internet service could vary from a “very strong signal” to no signal at all, depending on where you are and the number of people competing for the bandwidth.
This according to two officials with Tele-Optics, which installed the system a few weeks ago.
Earlier this month, Eleven mesh access points have been installed in the city to provide the wireless Internet service, and four more are expected to be installed. Eastman Credit Union and the Kingsport Housing and Redevelopment Authority’s Greater Kingsport Alliance for Development announced the expansion of Wireless Fidelity — or Wi-Fi — in the city.
The new service allows individuals with a Wi-Fi enabled laptop, PDA or cell phone to access the Internet free of charge in several areas, including downtown Kingsport, Riverview, and the Borden Mill and MeadowView areas.
ECU is footing the bill for the service, and Kingsport-based Tele-Optics is implementing the network.
The Times-News recently went to all four locations where the free service is being offered and checked the connection rate with a laptop computer, both inside and outside a vehicle. The time of day was between 9 and 10 a.m.
In the parking lot of the MeadowView Conference Resort and Convention Center, the connection rate varied from an acceptable 48 megabytes per second (Mbps) down to a weak 5.5 Mbps.
At the V.O. Dobbins Center the rate was 54 Mbps, the Kingsport Public Library registered 24 Mbps, and at the intersection of Main and Broad the rate was 54 Mbps and the computer denoted a “very strong signal.”
In the parking lot at Borden Park, no wireless signal could be detected.
Eddie Davis, director of technical service at Tele-Optics, said 11 mesh access points have been installed in the city to provide the wireless Internet service, but none have gone up in the Borden community yet. Davis said four more access points are expected to be installed, with one going up at Holston Valley Medical Center.
“Everything is stabilized. We’re going out and mapping our coverage area, see where it overlaps and find the dead spots. We’ll feed that information back to the city and get a revised map and try to fill in those dead spots if there is a need there,” Davis said. “We have to see where our coverage is going now and then see if we have enough left to expand into Borden.”
Davis said the download rate will vary depending on various factors.
“Where the access point is located, what’s around it (buildings, trees). There are a lot of variables that can change what your download speed is,” Davis said. “You have to have good line of sight with the access points, and it doesn’t penetrate the buildings very well. It’s an outdoor system. That’s what it’s designed for.
“If you’re on the very fringe of the signal, then you’re going to get a very weak signal.”
Frank Waldo, president and CEO of Tele-Optics, said if you are within 300 feet of the access points, then the download rate should be good, and depending on the amount of traffic on the system, the range could go as far as 1,200 feet away.
Another factor could be how close you are to the building where the access point is located. Waldo said if you’re too close, you could be within the access point’s shadow and the bandwidth would be reduced.
“We try to stand the (access points) off three feet to minimize the shadow,” Waldo said. “As with any wireless network, it’s what’s between you and the (access points).”
Posted by douglassriverview at 11:08 AM