"It's such a treat to find my mom's old library book."

Those words from Teresa Delaney DeWald of Dayton, Ohio, when she located an old book from the former Douglass High School library with the name of her mom, Ellen Hemphill on the sign-out card. The book is "Alexander's Christmas Eve," a classic book of the holiday season. 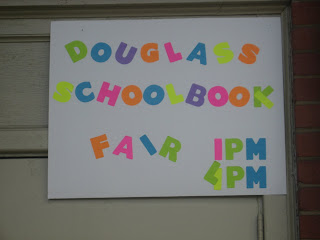 The book was one of many for sale at the Second Douglass School Book Fair, held in the historic Douglass High School Auditorium. It was fitting that the fair was held in the auditorium, because it is scheduled to be demolished in the renovation of the Douglass/V.O. Dobbins Community Center. Many former students flocked to pick up their old school books, and remember the good times they all had, during school assemblies. The event was also streamed live on the Douglass Website for about 2 hours (if you tried to see the live streaming and could not get through, please drop us a line at: douglassriverview@gmail.com) 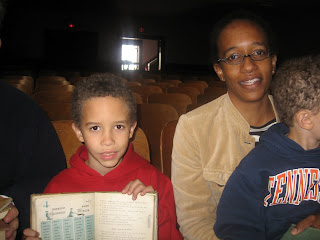 "I've been explaining to Max, my eight-year-old, about how schools were segregated back then," says Teresa. "When I started explaining it to him, he just had this look on his face.. it was just out of his scope or realm of knowledge that people were actually separated like that. When he goes to school in Dayton, everybody's together, black, white, Hispanic. It didn't seem like recent history to him, it was almost like ancient.. he just couldn't believe that his grandparents went to a segregated school. To him, it was just inconceivable, even allowed, or seen as normal."

"I have a lot of history to teach him." 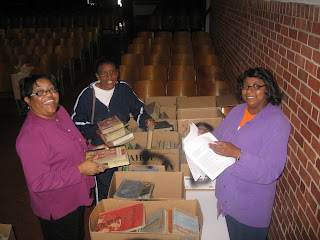 So many former students and book lovers found the alphabetized system the Douglass Alumni Association came up with, a much easier way to find their beloved books, and the whole process seemed like fun. Laughs, recognition, and tall tales accompanied the finding of each book, and smiles were evident as folks recognized their own handwriting from generations ago.

"When I worked at Southwest Publishing in Cincinnati," says Teresa, "i found one of the eidtions of their accounting book that I used to work on. That was neat.. my accounting books involved computers, instead of ledgers." 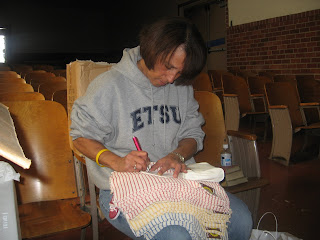 Not only were the books in alphabetical order, books that did not have the names of students in them, were put in the categories of what they were.. Health-Science, Math, English, Social Studies, and several miscellaneous books were also for sale. There were also vocational how-to and do-it-yourself books, too. 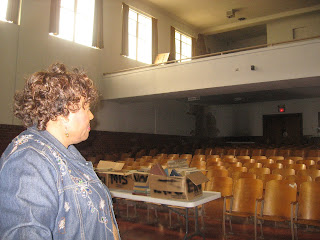 This was the first time Pam Rutledge Sensabaugh has been back in the auditorium since she graduated Douglass High School in 1965. "I can still see us coming down the aisles to take our seats during assembly," said Pam. "Just to be able to stand in here again, is wonderful." "It just brings back many memories," said Sandy Wilmer, "of the devotions and chapel we came to in here. You'd be on stage, and aeverybody sitting out there, looking at you." "I remember the Elks used to sponsor concerts and pageants inside this old building," says Ethel Ruth Russell.

The Douglass School Book Fair is one of the last public events, the old auditorium will see before it's torn down. 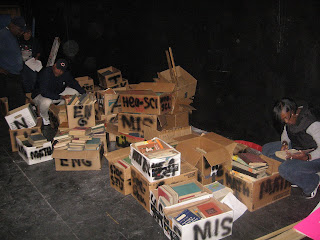 Folks were waiting for the fair to open, and they were there long after it closed. We also had a lot of reservations, with folks sending in their money for the books and to have them shipped to them.

The next School Book Fair will be next Saturday during the Alumni Association's Rummage Sale and Bake Sale at the Bethel AME Zion Church on Mapleoak Lane in Kingsport. The Book Fair runs from 7 AM to 2 PM, and the Rummage Sale is from 7 AM to 4 PM. Please spread the word to everybody so they can stop by and purchase many gently-used items, plus delicious pies and cakes. It's also a good chance for those who have not done it yet, to stop by and purchase their old Douglass school book. If you know of someone who may not know their school book is available, now's a good chance to purchase it, or reserve it for pickup later.
Posted by douglassriverview at 9:27 PM