When you think of fall festivals, you usually think of lots of music and entertainment, great food with most of the items homemade and homegrown, and enough fellowship to make you think friends are more like family. 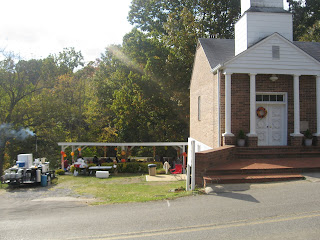 Welcome to the New Canton Fall Festival in eastern Hawkins County, Tennessee. The event this past Saturday, October 25, 2008 was all of the above, and more.

"The weather acted like it did not want to cooperate," says New Canton resident Billy Lyons. "Cold, cloudy and damp in the morning.. but by noon, everything started to clear out and warm up, and then the people came out." 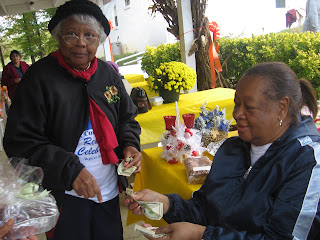 And came out, they did.

The main community gathering area was the covered area beside the Lyons Chapel AME Church on New Canton Road, and it quickly became a hubbub of activity. "We had fried fish (and it was wonderful--Calvin), ole-timey brown beans seasoned with hogmeat (also good), corn bread, coleslaw, all types of baked goods, carmel cakes, chess pies, cherry pies, you name it," says Billy. "The ladies down here in New Canton really know how to cook it up real good, cakes made with real butter and Swan's Flour.. just the best of stuff, you know."

It wouldn't be a fall festival without many homegrown items, grown over the spring and summer, and harvested for the fall.. even specialty items like pear relish. 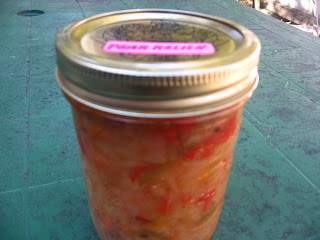 New Canton's Bobby Cox specializes in a topping called "pear relish." "The pears he uses, come from the tree in my yard," says Billy. "He slices them very fine, and then takes hot peppers and green peppers, to taste. You can have it hot, very hot, and also mild. Then, you season it down, and it'll sorta remind you of chow-chow that you can buy most any place to eat with brown beans, backbone, ribs and potatoes. The pear gives it a unique flavor all unto itself, and folks just cannot get enough of it." (it was indeed good, chow-chow like, with a sweet flavor and smell--Calvin).

No festival is complete without music. The New Canton Fall Festival featured Ozine Bly's daughter Lynette, an accomplished gospel singer, whose rich vocals have inspired many people with faith. Other singers also moved the festival goers with wonderful music, and lended a calming, moving atmosphere to the gathering.

And then there was Elvis. 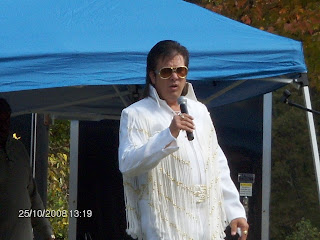 Of course, not the real one, but an Elvis Presley tribute by local musician Ronnie Blake of Mendota, Virginia (for folks who don't know where Mendota is, it's a small community nestled into a bend of the Holston River North Fork at the foot of Clinch Mountain, between Gate City and Bristol.. only a couple of miles northeast of the Carter Family Fold at Maces Spring, Virginia). Ronnie's interpretation of "The King" was masterful, to say the least. He held folks spellbound with his close reemblance to Elvis while singing hit hits. 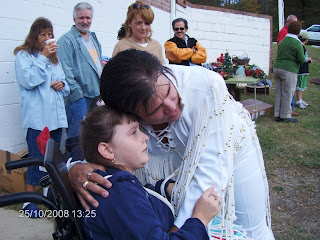 Ronnie was indeed a hit to the crowds of visitors to the fall festival. "We just met him in church one Sunday," says Billy. "One of the girls works with his girlfriend, and they came to church at Lyons Chapel, and he sang religious songs for us. The people really enjoyed it, and then we found out he has a tribute to Elvis, so we invited him back. His singing was one of the highlights of the day." 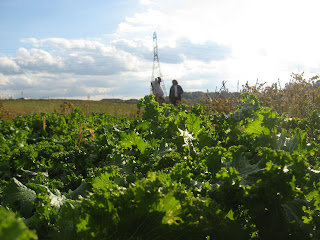 The only casualty of the day, was the cancellation of planned hayrides, a move mourned by kids at the New Canton Fall Festival. "There had been so much rain on Friday, and some of that lingered on into Saturday, that we just did not want to risk getting the wagons bogged down in the muddy fields," says Billy. "It was also kinda cool and damp, and so many colds and flu are going around that we didn't want anybody to catch them. The kids were disappointed and so were some of the adults, but next year, we'll try to plan a little better to get around the rain." 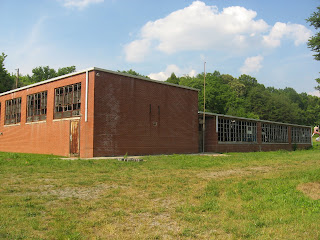 "Just to see the community come together is a blessing," says Billy. "The festival, along with the recent New Canton Family Reunion, proves that there is a lot of interest in folks returning to their roots. We're going to use both events as a springboard to renovating our old school, the New Canton School across from Lyons Chapel. We hope to fix it up into a community civic center for eastern Hawkins County, where we can have events all the time. We'll have a work day where everybody can come out and help clear out the grounds. I have a friend with excavation equipment, and he's volunteered to bring some of it out to help clear out debris." 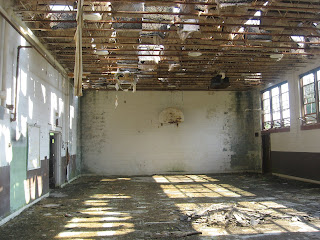 "We could have at least four things in the building at one time, the way we see it," he says. "There are four large classrooms for meetings, plus the gymnasium-cafeteria multi-purpose room, and then there are also the grounds outside, for outdoor events. We've already filled up a couple of those huge dumpsters twice, getting debris out. Another of our long-range goals is to have flea markets at the site, too."

Keep your eye on New Canton. Those folks are getting their act together, and gaining momentum towards revitilizing one of East Tennessee's first African-American communities. We should all reach out, come out and support our friends and neighbors in eastern Hawkins County, because THEIR roots are the roots of us all.
Posted by douglassriverview at 11:49 AM